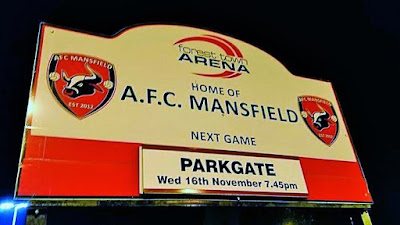 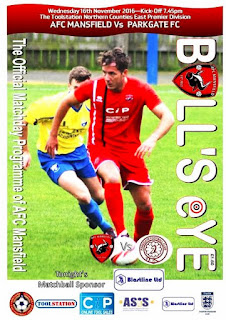 A week is a long time in football and tonight Parkgate looked 80% better than they did last Wednesday night, when the 3-2 margin of defeat against County Senior League side
Frechville CA in the Sheffield & Hallamshire Senior Cup actually flattered the Rawmarsh based side. On Saturday the recently installed Steelmen's manager Graham Nicholas, steered his side to their only win of the season so far, when they overcame Rainworth Miners Welfare at Roundwood, with Ben Thornton netting the only goal of the game, while AFC Mansfeld were overcoming Blidworth Welfare by two goals to one, after going in a goal down at the break, in the FA Vase second round at the Central Midland League side's Mansfield Road ground, in front of a big crowd.
The Bulls will now face Hucknall Town away, in the third round on December 3rd... and that is where we will be going after the Stags Under 18 game at Clipstone against York City (11AM kick off) finishes. 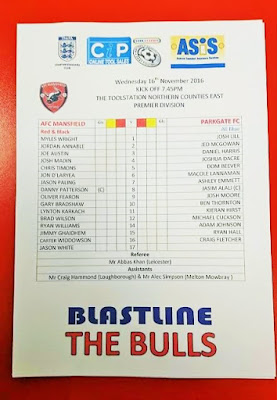 Rudy Funk's side are sat comfortably in a top ten position, in what is their first season competing at this level, while Parkgate's predicament is so desperate, it is rumoured that United Artists are on stand by to remake the epic 1963 film 'The Great Escape', if the Steelmen manage to avoid relegation; with Nicholas taking on Steve McQueen's role as Captain Virgil Hilts (AKA the cooler king) as he escapes successfully from Stalag Luft III in Sagan and actually clears that troublesome barbwire fence on his 1961 Triumph TR6 Trophy (disguised as a German BMW R75)  motorcycle this time around... and there will be no Bud Ekins around to do any of his stunts either, like there was first time around.
Parkgate are currently eight points below the safety margin, but with seventy two points still to play for, if they perform as well as they did tonight, then it might be a smart idea for the teams directly above them to start getting a few half decent results under their belts any time soon.

Parkgate made most of the early running tonight, but the Bulls are adept at absorbing pressure then methodically breaking down their opponents.
The visitors number nine Josh Moore, who was one of their better players in last week's cup exit, was pivotal to there ambitions tonight, battling away to maintain no small amount of pressure on the Mansfield keeper Myles Wright, while weighing in with his considerable presence in defence whenever the home side went hunting for the opening goal.
But in spite of the visitors lively start, it was the Bulls who took the lead, on fifteen minutes, when Ollie Fearon nudged a forward pass in front of Gary Bradshaw, who calmly planted the ball past Josh Lill from ten yards.
Bradshaw almost added a second goal from the Bulls next attack, but Lill got down to his left to make a save as the home side's number 10 let fly with dipping twenty five yard half volley.

Ashley Emmett tried to squeeze the ball through the Mansfield defence to Ben Thornton and was inadvertently assisted by Josh Madin, who air kicked instead of putting his  foot through the ball and Wright was forced into blocking Thornton's low, well struck shot from twelve yards.
Lynton Karkach's first touch and burst of pace took him past Josh Dacre, but the former Handsworth player recovered quickly and got back goal side of the Bulls winger and got his tackle in at the second attempt.
Mansfield pushed forward again  and Josh Paling's ball into the visitors area picked out Fearon, but Lill was well placed to save from the resulting header.
Parkgate had started the half well, but the home side were finishing it with a flourish and when Joe Austin released Paling down the left flank and he delivered the ball across the face of Lill's goal, Macole Lannaman and and Dom Beever, both needed to block close range shots from Bradshaw and Danny Patterson respectively.
HT: Bulls 1 v Steelmen 0

Both sides had good opportunities at the start of the second half, with Wright denying Jasmin Alali, while Fearon poked the ball just inches past the post at the other end.
Fearon and Bradshaw combined in front of Lill's goal, but when Austin shot from a knock back, his effort deflected over the bar.
Things looked grim for Parkgate when Ben Thornton was forced to limp out of the game, but cometh the hour, cometh the man and substitute Craig Fletcher was on hand to pick up the loose ball, as Mansfield cleared Jed McGown's corner away and crashed the ball past Wright from thirty yards.
Rudy Funk responded immediately, by sending on Ryan Williams and Jimmy Ghaichem in place of Paling and Karckach, to give the Bulls more pace and width. 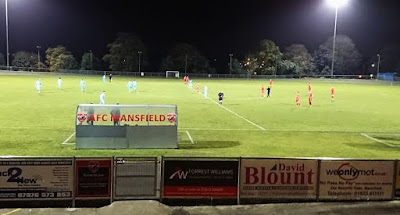 The referee Abbas Khan, showed Fletcher a ridiculous yellow card, when Wright hit a free kick up the field, while the Parkgate number sixteen was walking back towards his own half, almost ten yards from where Wright took the kick from... and the ball hit him squarely in the middle of his back. It was an unintentional obstruction; Fletcher hadn't even seen the ball coming and Parkgate gained no advantage from the incident... but that isn't how Mr Khan  saw it.
Even though everybody else in  the ground probably did. 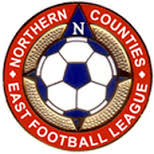 The visitors had the scent of three points in their nostrils and as Moore took the ball on in  the Bulls area, before rolling it back to Fletcher, only a great reflex save from Wright stopped the Steelmen's substitute from claiming his second goal.
Ryan Williams showed why he is still playing football as he approaches his fortieth birthday, when he showed some good trickery out on the left flank, before delivering the perfect ball for Fearon to head downwards into the bottom right hand corner of the goal, with twenty minutes remaining.
Parkgate had nothing to lose now as they pushed forward, but there was always the risk that they would leave themselves exposed if they committed too many players forward... but the numerical risk paid off, when Wright blocked Moore's goal bound effort and the loose ball fell to Fletcher, who bulged the Bulls goal net with a ferocious strike, to level the score once again.
The Bulls chairman Andy Saunders thought that although Parkgate had deserved something out of the game, Wright had possibly been fouled just before Fletcher struck, but that would have only cancelled out the visitors club secretary Bruce Bickerdike's concerns that Bradshaw had scored the opening goal of the night from an offside position.
All square and no harm done then chaps! 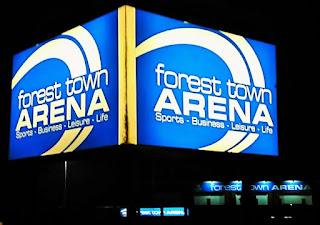 Chris Timons and Madin, both headed over from a brace of left wing crosses from the Bulls 'pocket rocket' Ryan 'Rhino' Williams.
In stoppage time Kieran Hirst had two chances to claim the result for the South Yorkshire side, but his shot on the turn was gathered safely by Wright and though the Parkgate number eleven almost benefit from a slip by Timons and a fumble by Wright, the home side cleared the ball away from McGowan's corner as the full time whistle sounded.
FT: AFC Mansfield 2 v Parkgate 2
The NCEL never fails to throw up some surprising results, especially this season.
I'm sure that the visitors would have taken a draw prior to kick off, even though they almost forced a win on the night, while I would have thought that the Bulls would've expected nothing less than a convincing win against the Division's bottom side, but they had to settle for a solitary point on a cold and windy night in Forest Town, when they performed below par, while Parkgate were well up for it. 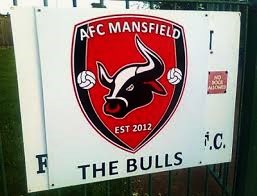 Both sides have tricky home games in the NCEL on Saturday when title favourites Cleethorpes Town visit the Forest Town Arena and Bridlington Town, who have been on a roll since Curtis Woodhouse took over as their manager, head for the Roundwood Pavilion.
Posted by Davy Lamp at 22:26