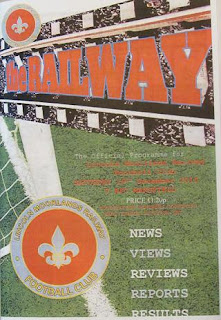 Saturday 19th December 2015
Toolstation NCEL Division 1
at Newark Road, Lincoln
Lincoln Moorlands Railway (0) 0
AFC Mansfield (1) 5
Leigh Warman 18 OG
Dean Rick 50, 79
Ryan Williams 75 pen
Phil Buxton 87
Admission £5. Programme £1.20. Attendance 39
With our reconnaissance mission to Ashby Avenue completed, there was a choice of non league fixtures available to us locally, but the most attractive option by far was a revisit to Moorlands ground on Newark Road, just ten minutes drive away from our first game of the day.
The last time that these two sides met back in September, it had been something of a 'goal-whoring' experience for all of those present, with the Bulls striker Dean Rick scoring seven times in a 12-2 home win at Forest Town, see HERE 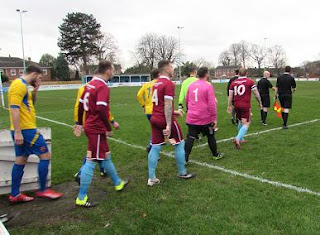 Moorlands were much better this afternoon, than they had been that night... but even after having made changes both on and off the pitch, they have an enormous task on their hands to salvage anything out of this season, as they sit marooned at the foot of the NCEL Division 1 table, some ten points behind the next bottom club Winterton Rangers.
This afternoon's win, coupled with Hull United dropping points courtesy of a last minute equaliser for Westella VIP, means that AFC Mansfield climbed back up to second in the table, where they are now seven points behind the top club Hemsworth Miners Welfare with two games in hand. 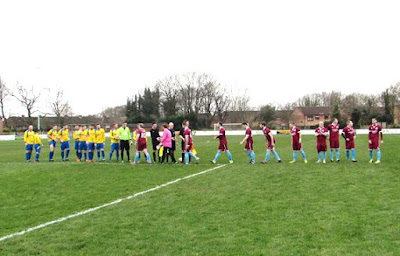 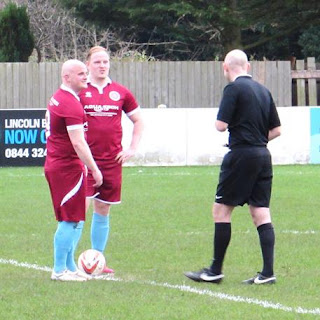 Luke Jeffs got the ball rolling for the first attack of the game, combining well with Phil Buxton and Mark Dudley, but as the latter dropped a cross in front of Dean Rick for him to run onto, the Bulls captain had strayed marginally offside. It proved to be a frustrating opening 45 minutes for the Bulls skipper.
Gary Dorran did well to cut out the danger posed by Ryan Williams as the visitors play-maker made an angled run into the penalty area. In spite of the final score, Dorran actually had a decent game this afternoon.
Once again it was Dorran who kept the lively Bulls at bay as he came out on top in a one against one duel with Rick, but the ball was only half cleared and as Steve Sowter knocked the ball sideways in front of the goal, Leigh Warman had the misfortune of putting the ball into his own goal after 18 minutes. 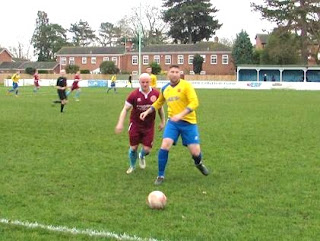 Jeffs tried his luck from long range but his effort was blocked by a Moorlands defender and the ball sat up as Brad Wilson got to rebound first and thumped it narrowly over the crossbar.
You could have been forgiven for assuming that the rampant Bulls would now put the Moors to the sword, but Tom Richardson's side were intent on making a game of it.
The battle for midfield was a pretty determined contest, with the home side closing down space and making Rudy Funk's team work hard to do anything creative with the ball.
Lee Croft(a recent signing from Grimsby Borough) rolled a pass to Tom Parker who tested Jason White from 18 yards... and moments later the visitors were on the back foot again when Croft's shot rebounded into the path of Shane Clancy who drilled a shot wide of the left hand post.
Josh Schofield was moving the ball around well and linking up with Croft, but the Mansfield defence were just about keeping on top of the situation. 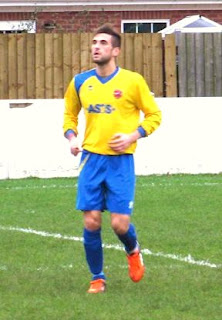 Williams and Sowter tried to get the visitors momentum going again and when Buxton put a measured pass through the Lincoln defence to Rick it looked odds on that they would be going into a comfortable lead any moment, but the usually reliable centre forward miscued his shot and directed it straight at Dorran.
Williams right wing cross was cleared behind by Craig Hiatt and Dooran was on hand again as Jeffs in-swinging corner finally found it's way through several challenges to Jamie Waltham whose downward header was saved on the line by the busy Moorlands keeper.
Jamie Greenhall picked up the ball in the centre circle and set off on an unchecked run towards White's goal, but he pulled his shot wide of the target. 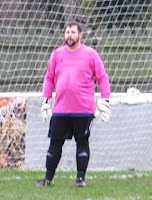 At the other end, Rick missed a sitter when Williams cross skimmed off of his head by the right hand post and flew wide of the left.
At this point, I think it would be fair to say that Rudy Funk became, err... 'animated' and his 'instructions' from the touchline could probably be heard at Sincil Bank, where Lincoln City were playing out a 2-2 draw with Barrow just up the road.
As the first half wound up, Dorran did well to make a double save from Sam O'Malley and Williams shot over from twelve yards after Sowter had picked out his run with a great pass.
HT: Lincoln MR 0 v AFC Mansfield 1
The home side mounted the first attack of the second as Greenhall took flight down the left wing, but Wilson blocked the path to goal and the Moorlands number eight's speculative long effort skimmed over the bar. 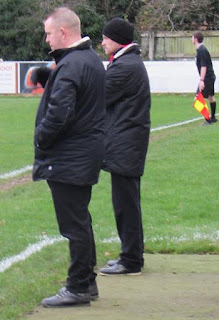 Having a had a short but sharp lecture from their management team at half time, the visitors would've been relieved to net their second goal five minutes after the restart.
Williams and Rick were causing no end of problems for Lincoln around their box and the latter bagged a real poacher's goal for himself, with a deft flick from Mark Dudley's left wing cross, to head the Bulls second goal. Rick triumphantly celebrated now that he had finally found the net, after a profligate opening forty five minutes.
Wilson pushed forward down the right flank and delivered the ball to O'Malley, who shot on the turn but stroked the ball just the wrong side of the post.
The visitors were by now finally overcoming their hosts in the middle third and passing the ball around well on the lush grass that was rippling in the wind and reminding me of how I had sneaked out early this morning without mowing my front lawn. There's always tomorrow, or Monday... or some other time! 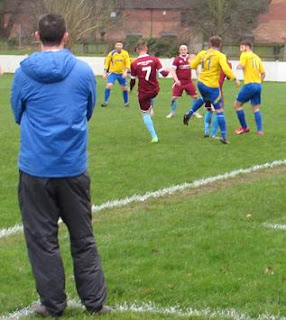 Lincoln had worked really hard against their high flying opponents and didn't deserve to be on the end of a thrashing, but the way that AFC Mansfield were picking up the ante now, suggested that there could be one in the offing.
Rick chased a back pass to Dorran down and was a whisker away from getting their first as the Moors keeper knocked it away to Alex Mackinder, O'Malley best Dorran with a crashing shot that cannoned back off the woodwork.
The signs were looking ominous for Lincoln now and the Bulls had an ace up their sleeve, as they introduced Carl Haslam from the bench for the final twenty minutes.
The impact was almost immediate with Haslam getting involved in the build up play to release Rick inside the twelve yard box, where he was upended.
Haslam wanted to take the spot kick, but Williams stepped forward and drilled it past Dorran put the outcome beyond doubt. Haslam's work commitments away from the area stop him from playing as often he would like to these days, but his desire to make an impact on this game in the closing stages was clear to see.
The 'You Tube celebrity' danced past three challenges down the right flank before crossing to Buxton at the back post who directed the ball into the path of Rick who added his second and the Bulls fourth from close range.
Prolific strikers don't go bad overnight and to his credit Rick still found the target twice while he was having an off day, though it should also be said that Dorran had played out of his skin today, especially in the first half. Rick's twenty four goals before Christmas is a phenomenal strike rate for any player at any level... even though the NCEL's top scorer Ash Flynn at AFC Emley has scored fifty already in this division. 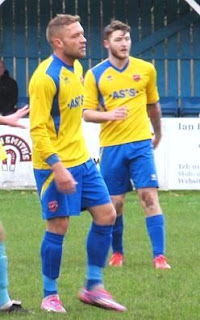 Croft, definitely the home side's man of the match today, kept plugging away at the other end and when he picked out Matt Wilson with a knock back, Jason White needed to be at full stretch to tip a twenty five yard pile driver over the bar.
I don't think anyone would begrudge Lincoln a goal for hard work they had put in, but by the same token. sometimes the Bulls defence doesn't get the credit it deserves either and they applied a similar ethic to keep their first clean sheet in six outings. That said, they were counting their blessings when Schofield spotted White off of his line and dropped a long range lob just wide of the post.
The game's finale came when the man of the moment provided another party piece; Haslam accelerated in from the right flank and smashed the ball across the face of Dorran's goal, it only needed a touch and Buxton was on hand to provide it, 0-5 game over!
Right at the death, Haslam went for goal himself, but Craig Hiatt put himself in the way and bravely blocked his shot.
FT: Lincoln Moorlands Railway 0 v AFC Mansfield 5
I really hope that Moorlands can get a bit of a run going, it's a nice club and those who are endeavoring to turn their fortunes around are obviously triers. But despite their best efforts, they were beaten by the better team today.
BTW Mr Programme Editor... I really struggled to find 'Hallom' and 'Shirebroyk' in your NCEL word search puzzle; not that this blog is noted for it's literacy or spelling prowess. 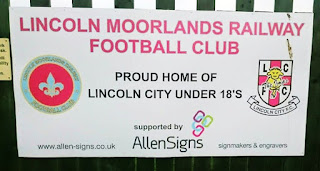 FOR MATCH REPORT FROM THIS GAME ON
THE AFC MANSFIELD WEBSITE CLICK HERE
Posted by Davy Lamp at 18:39