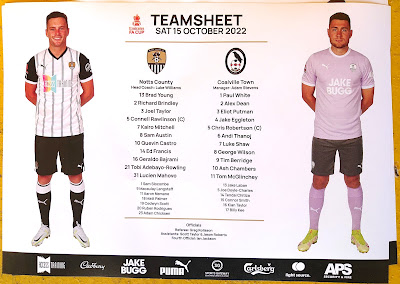 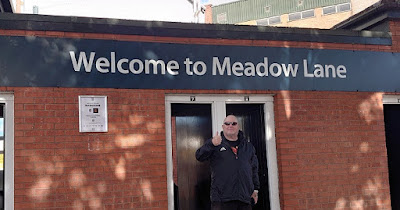 A few feathers were ruffled (possibly even plucked) at Meadow Lane this afternoon, where the Magpies hosted the Ravens, in a tussle for a place in the First Round of the FA Cup.
Much to the obvious delight of the 1.397 travelling fans who's made their way across from Leicestershire; the underdogs: Sothern League Premier Division (Central) side: Coalville Town, produced an upset, by knocking out the National League leaders: Notts County, at the Fourth Qualifying Round stage.
The Ravens only previous First Round game, throughout their ninety-six year history, was back in November of the 2004-05 season, when they lost 1-0 at Adams Park against Wycombe Wanderers.

County's manager Luke Williams rang the changes for this cup-tie, but as the game went on, with Coalville proving to be very formidable opponents, regular starters: Matt Palmer, Ruben Rodrigues and the prolific frontman: Macauley Langstaff, were all introduced from the bench during the second-half, to beef up the Pies artillery.
But ultimately, although the hosts retained the ball well, almost playing it to death at times, the Ravens defended bravely, keeping their hosts at bay, while making the most of their forays into the home sides half of the pitch. 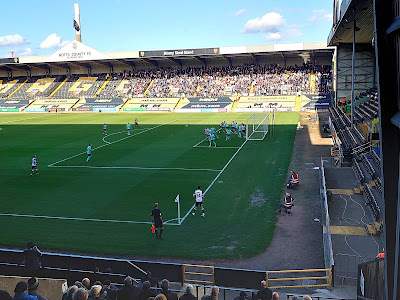 The game was only three minutes old when Adam Stevens' side took the lead, after Tim Berridge threaded a slide-rule pass in behind the Notts defence to Tom McGlinchey, who stroked the ball past Brad Young.
A Pies fan, who was still taking his seat nearby, rather condescendingly declared: "Ooh! The magic of the FA Cup! Well that'll soon do a disappearing trick, when we win four or five-one".
"You see! Abracadabra! I told you! Who do we want in the next round?", he added, rather complacently just seven minutes later, when Sam Austin took the ball down from a Tobi Adebayo-Rowling delivery and beat Paul White to level things up. 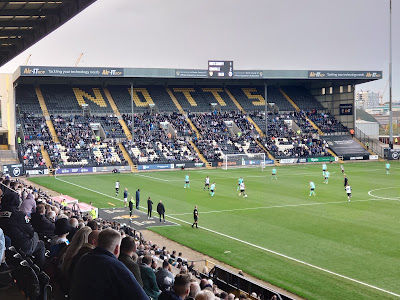 "I don't like him!", hissed my usually polite, reserved and quietly spoken better half, in loud enough tones that the target of her disdain could hear her quite clearly.
He glowered, but didn't say very much for the remainder of the afternoon, so well done mi' duck, fait accompli me thinks.
Though by the time that the scheduled ninety minutes had elapsed (plus six extra nail-biting ones, for the visiting fans to endure) it wasn't only the blonde Beelzebub that had silenced him.
Because, all told, he didn't have a great deal to get excited about this afternoon... and fairly soon, the visitors were in front again, when Alex Dean broke forward for Coalville and played the ball down the right, to where Berridge carried it forward, before crossing to Ash Chambers who turned the ball into the Pies net from inside the six-yard box.
Cue Mrs W piping up: "Ooh! Look a big rainbow... and the magic of the FA Cup is back!?" 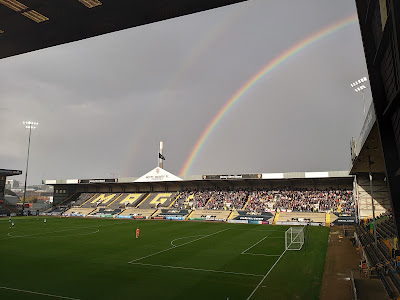 "Shall we watch Coalville in the next round as well!?", asked my increasingly, jubilant and noisy better half. Seriously! I reckon Tom Baker's scarf had less colours than hers, when he was playing Doctor Who.
Bloody hell woman! How many teams bandwagons is it even legal for you to hitch a ride on!?
In the event, I suspect that there are more train strikes that day, so I doubt we will be going very far anyway... and besides, it might be a good idea to leave you know who at home in future, if she is of the inclination to wind people up and then hide behind me.
Coalville defended their two goal cushion up until the sixty-sixth minute, when their keeper misjudged the flight of Joel Taylor’s long knock into the area and let the ball sail over his head, to where Austin gratefully accepted the unexpected gift of a chance and nodded it into an open net. 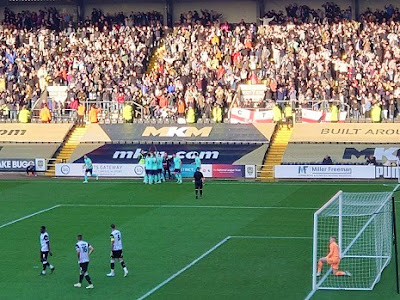 To compound the visitors worries, County then introduced the National League's current top scorer: Macaulay Langstaff from the bench in a bid to stamp their authority on proceedings.
Notts paid an undisclosed fee to Gateshead in the summer, for last season's National League North top scorer Langstaff, who netted thirty-two goals and provided fourteen assists as he helped to steer Gateshead towards their title win last season.
But the Ravens were undaunted by reputations and dug in deep to repel the Pies increased attacking firepower.
And as they continued to thwart the hosts, a draw looked to be on the cards, with a subsequent replay at the Owen Street Sports Ground, or the Mander Cruickshank Solicitors Stadium as it is known for sponsorship services. 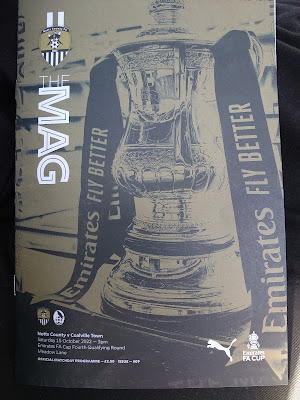 Seemingly, it was just a question of whether the 'plucky underdogs' could hold out until the final whistle. but as regular watches of the beautiful game will all know, only too well, it is seldom scripted. And one should: i) never leave early, and ii) always expect the unexpected.
In the eighty-seventh minute, Notts won a corner, but Coalville cleared their lines and quickly launched a late counter-attack. Tendai Chitiza knocked a lengthy pass into the County half towards George Wilson,  who picked up possession and ran into the Pies area before knocking the ball across the face of Young's goal. Connell Rawlinson attempted to make a last ditch clearance, but could only turn the ball into the path of  McGlinchey, whose first time shot ended up in the back of the net, as it cannoned in off of the Ravens number seven: Luke Shaw.
FT: Notts County 2 v Coalville Town 3 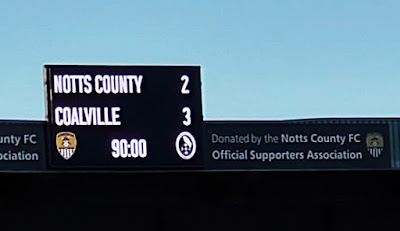 Football... you have to treat it with respect my friends. Because, just below the surface it's hiding and biding it's time, waiting to sink it's teeth right into your fleshy bottom.
Posted by Davy Lamp at 18:34 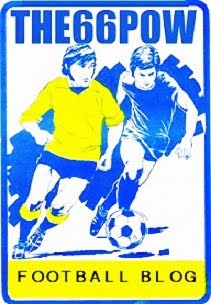