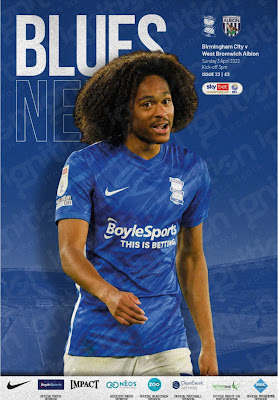 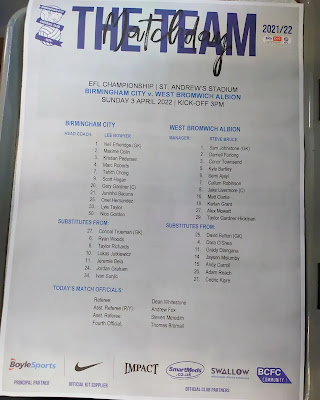 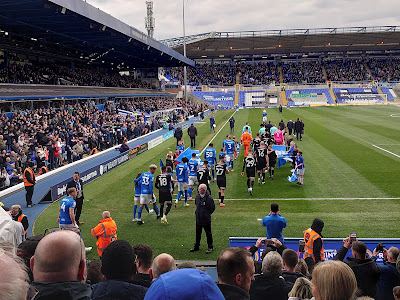 A game moved to Sunday at the behest of West Midlands Police, who didn't want Blues and Albion meeting on the same day that Wolves and Villa were plating at Molineux yesterday (a game that the home side won 2-1).
Steve Bruce, who had a six year spell (give or take a fortnight) at St. Andrew's) is currently in his twelfth managerial position (including two terms at Wigan Athletic) as he looks to salvage the Baggies season.
Going on today's evidence he's going to have his work cut out to that end.
Birmingham had not beaten Albion in their last nine attempts, in fact not since Bruce himself was Blues manager back in October 2006, when Gary McSheffrey scored both goals in a 2-0 win.
This was a poor, to the point of being impoverished, game of football, played out on a bitterly cold afternoon.
As we were leaving the ground, after the referee had put everybody out of their misery by blowing up for full-time, my friend asked of me: "Go on then mister blog writer, sum that one up in three words". My response was instant, but wage and thieves are the only two words I can repeat here before the 9PM family viewing watershed. 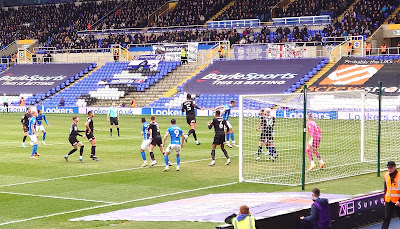 West Brom had an early penalty appeal waved away, when the ball struck Marc Roberts' hand as he was trying to keep his balance in the Blues area. Steve Bruce was incensed by the 'unintentional, ball to hand' verdict delivered by the match officials, while the St. Andrew's faithful breathed a collective sigh of relief that VAR isn't being used in Championship matches.
Do these things balance themselves out over the course of the season? Of course they don't, because we're all hard done by and wronged against far more than we're, err. righted in favour of. And that equation applies to all fans, of each and every team in the known universe. 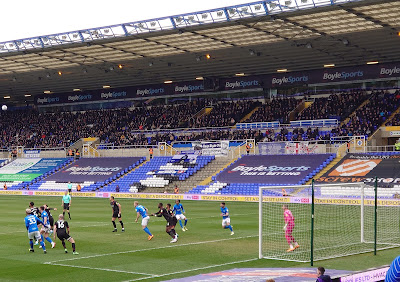 Tahith Chong limped out of the game in the fifty-sixth minute, which was sad to see, because the Manchester United loanee was one of a only a handful of players who might have been able to show add a moment or two of skill and ingenuity to unlock this dreary stalemate. Alas, this afternoon could mark the last ever time that the popular Chong might ever wear the royal blue of Birmingham City. Another one to add to the burgeoning pile of what-iffery at St. Andrew's.
But hey! Cheer up, there's a goal just over the horizon... Onel Hernandez chased down Juninho Bacuna's long knock down the right channel, with Conor Townsend in hot pursuit, Hernandez won the race and hooked a first-time cross towards the Baggies goal, that Townsend prevented from reaching its intended destination with his right arm, giving the referee Dean Whitehouse an easy decision to make, as he sounded his whistle and pointed to the spot.
Hence, the only goal of this lacklustre game was scored by the on-loan Nottingham Forest striker Lyle Taylor, who netted with one of his trademark slow walk-up penalty routines culminating with him smashing the ball to the Albion keeper Sam Johnstone's right.
Lee Bowyer's side travel to Forest next Saturday, when they will have to change their line-up because Taylor isn't allowed to play against his parent club. 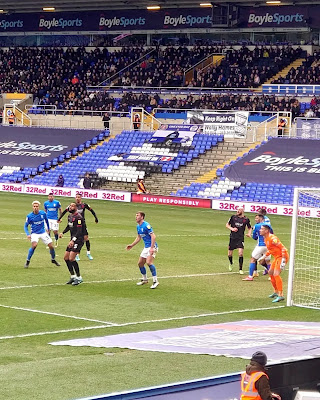 Blues had not won, or even scored, in three matches prior to this much needed narrow win, a result that ended Albion's four-game unbeaten run and most likely their chances of securing a play-off berth, on an afternoon when they didn't manage to register a single goal attempt on target,
For their part, besides Taylor's penalty kick, the home side only had one other shot on target: a long-range strike by Bacuna early in the second-half, that was low, hard and heading in the right direction, but incoming at a perfect height for Johnstone to deal with fairly easily. 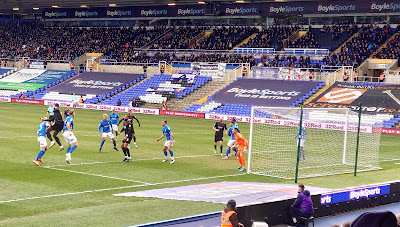 Blues seventh home victory of the season, only their eleventh win overall, lifted them up to the dizzy heights of eighteenth in the table, sixteen points clear of any relegation worries, but on current form, still not entirely safe from that possible end of season scenario just yet, even though they ought to be, on paper if nothing else.
The Baggies finished the afternoon nine points ahead of today's hosts, in twelfth place.
But never mind the mathematics, the reality of the situation is: that it is a gap that definitely won't be getting bridged during Blues six-game run-in to the end of the season. 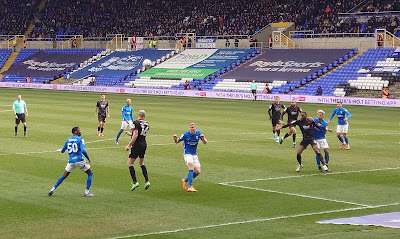 From a Blues perspective: A win. Three points. A clean sheet. And local derby scalp (even though the supporters of both of these teams would derive far more pleasure from putting one over another West Midlands club). Reasons to be cheerful surely?
On the face of it, yes.
But (and there is always plenty of buts at St. Andrew's these days), in reality what had just occurred was, one poor and under-performing team had beaten an opposition side who were even worse on the day.
It papered over the cracks, but they're still all there and getting bigger all of the time. 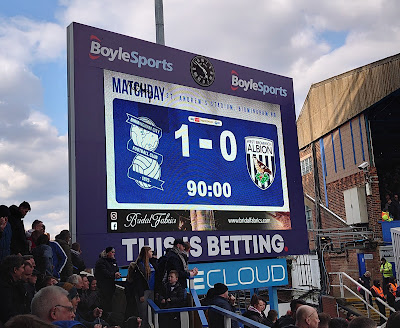 Albion manager Steve Bruce said after the game:: "That's got to be the worst game of football I've ever seen. It was lacking in quality on both sides."
While Lee Bowyer added: "It wasn't pretty, was it? It was really scrappy. Both sides struggled to pass it.
"We had to win ugly and we did that. It was a clean sheet against a lot of players who can hurt you."
With all due respect gentlemen, there were 17,936 people present today who could have pointed out all of the above, but it is you, not us, who need to provide the answers to how such a shit show can be remedied and vastly improved in the coming weeks.
The very real worry, is that it isn't beyond the realms of possibility that there could still be worse to come yet.
FT: Birmingham City 1 v West Bromwich Albion 0 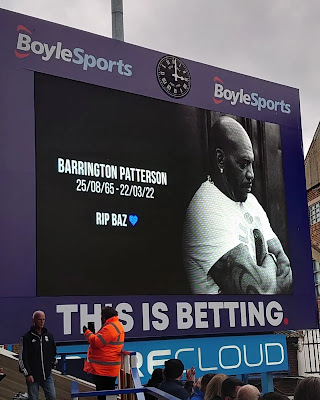 Of course, today wasn't just about the football, indeed some would say (and probably rightly so) that today wasn't even about the football.
This afternoon the life of one Barrington 'Baz' Patterson who very sadly recently passed away, was celebrated and commemorated... and a memorial walk to St. Andrew's from the city centre was very well attended.
Baz rose to prominence in the city of Birmingham in the eighties, for his part in the activities of Blues notorious hooligan group the Zulu Warriors. 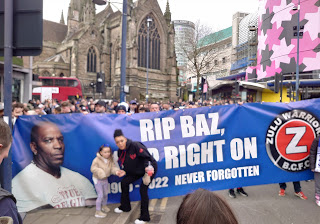 And in more recent times his work for charities and good causes is worthy of a book all of it's own, particularly his efforts to combat knife crime in the city and the fundraising efforts and voluntary duties he undertook (leading by example) helping out the homeless and vulnerable community who live on the streets of Birmingham.
Respects big man.
Deepest condolences to his lovely wife Tracey and all of Baz's family and friends from the variety of differing avenues that his life path took. 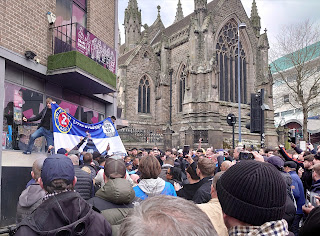 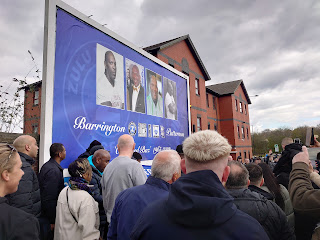 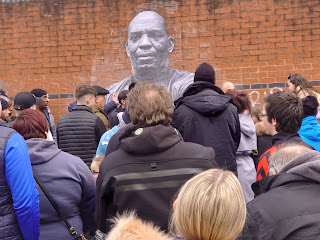 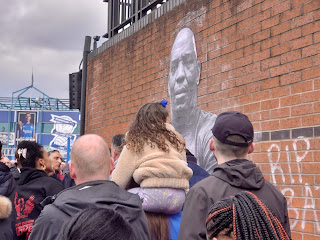 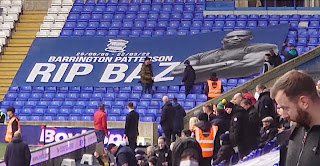