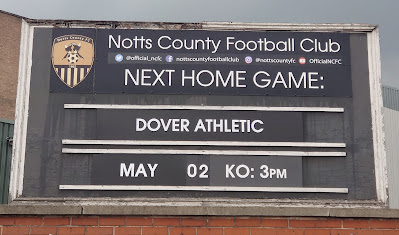 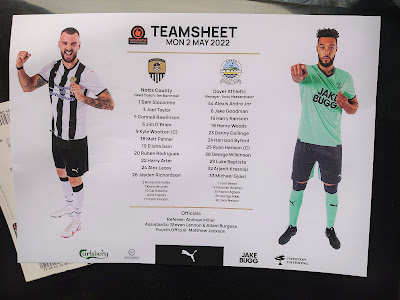 I arrived in Nottingham early in order to take in Mansfield Town's League 2 game against Salford City that was being shown live on SKY TV in the bars around Meadow Lane and on the screens in the concourse of the Derek Pavis Stand inside the ground too.
That game finished 2-2 when a win for the Stags would've seen them climb into the automatic promotion spots with just one game to go. Now it'll all go down to the wire next Saturday, when second placed Forest Green Rovers visit a sold out Field Mill, while results elsewhere could have a massive bearing on whether Nigel Clough's side clinch a top three spot, end the season in the play offs or possibly even miss out on either the above. If only Mansfield could've scraped a making hard work of it 1-0 win... a bit like Notts County were about to, then the world would've been a much better place. 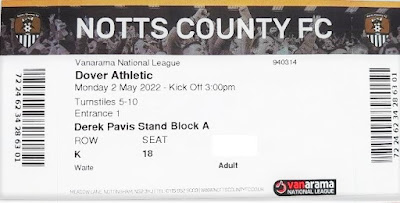 With two games of their season remaining, in spite of winning twice and drawing six times this season, Dover Athletic lay dormant in bottom place at the foot of the National League table, on zero points, after starting the season with the handicap of a twelve point deduction, for failing to fulfil their fixture commitments last term due to the financial impact of the Covid pandemic.
After this afternoon's fairly unspectacular win, where they made heavy work of overcoming their stubborn visitors, Notts only need only one more point from their final two outings (Altrincham at home and Maidenhead United away) to guarantee themselves a place in the promotion play-offs. 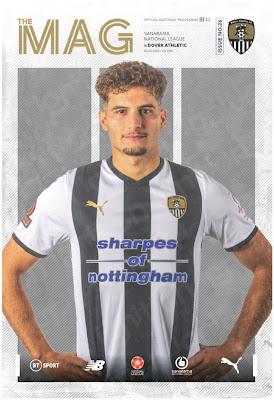 It might seem odd to anybody who wasn't present at this game today to hear that some of the home crowd actually booed County off the pitch after the final whistle, given that the majority of the action was played out in the Dover half of the pitch and the Pies had mustered a weighty total of nineteen attempts on goal against their lowly visitors, who they had beaten 3-0 just six days ago in Kent.
But, to quote the local radio reporter I heard when I got back to my car: "Well, it was a win, but it was dire", before inviting Pies fans to ring in during the next thirty minutes to share their views".
Rather than subjecting myself to any more of that doom and gloom, I opted to listen to a playlist of Kraftwerk remixes all the way home instead. 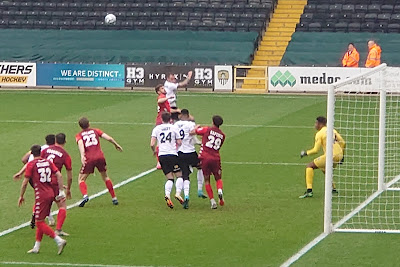 In truth, I'd given up trying to stifle my yawning during the second half and now felt that I didn't want to subject myself to a further half hour of tedium, listening to people moaning about how dreary the afternoon had been. Maybe County, with one foot (in all probability) already in the play-offs, froze when it came to pushing on, perhaps they were wary about keeping something in reserve for the forthcoming lottery of games that they surely must be on the verge of qualifying for, but lets give credit where it is due; Andy Hessenthaler, to his immense credit, with an already relegated team who had nothing to play for but their pride, set up his side in a manner to stifle their high-flying opponents and fend off the thrashing that many attending this game were anticipating. 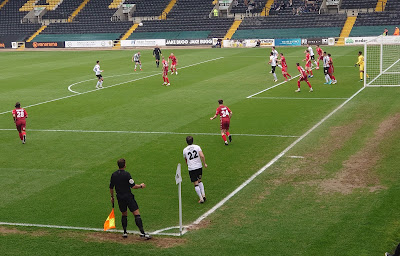 It wasn't pretty to watch, but you can't fault any of the Dover players for giving nothing less than 100% and leaving everything they had out on the pitch.
County huffed and puffed, but 'The Whites' (playing in red), had constructed their house on solid foundations and though they rode their luck a few times, the well drilled visitors rear-guard was only breached once... well, if you discount the goal that Kyle Wooton had struck off (incorrectly as it transpired) for offside and the absolute sitter that the same player missed from virtually under the crossbar. Take nothing away from the Alexis Andre Jnr either, who's agility and ability in pulling off at least three top draw saves, contributed greatly to his side restricting the Magpies to just a single goal. 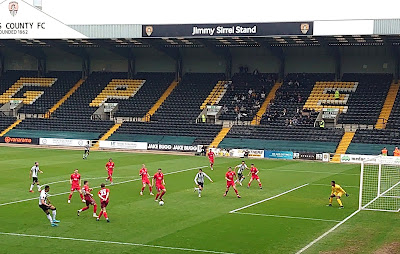 Just two days ago, County had lost on the road at Aldershot Town, who'd had the added incentive of desperately needing the points to ensure their survival in and continued participation in non league football's top flight beyond this season, so it was understandable that Ian Burchnall had taken full advantage of the squad rotation options available to him, in a bid to keep his players in top condition for the battle ahead. He'll know which of his charges are carrying knocks and blowing out of their bottoms stamina wise and picked a starting line up that could do the task that was required today... and regardless of how ineffective they were in front of goal at times as Dover bravely put their bodies on the line, three points is three points, especially during the run in at the business end of the season, with so much at stake. 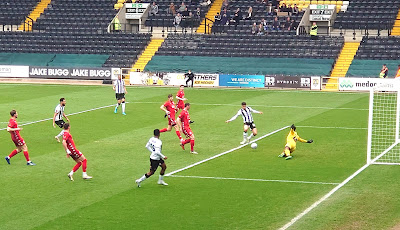 Ruben Rodrigues netted the only goal of the game (above) in the  eighteenth 18 minute, when he swept in Jayden Richardson's sideways knock across the six yard box, after Jim O'Brien had unlocked the visitors defence with a measured diagonal ball into the path of Richardson's run. It was Rodrigues' twentieth goal of the season in all competitions, which won't have gone unnoticed amongst the the ranks of the scouts from Football League clubs who have been at Meadow Lane this term checking on the  progress of the twenty five year old Kyle Wooton who has been weighing in with an average of almost a goal every other game for Notts this season. 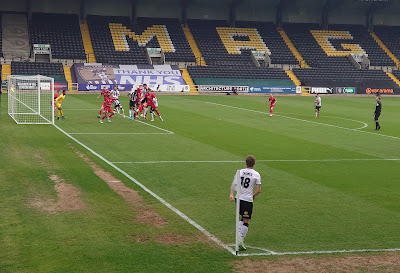 Besides coming up against a resolute Dover defence  who dealt steadfastly with just about as many crosses from both flanks as you'd find on your average spot the ball coupon, while a rack of missed chances and an above average number of 'crossbar challenge' successes added to the equation,  Meanwhile, County had almost as many corners as you'd find on a rhombicosidodecahedron, that they failed to make good of as they dominated the game, cue the frustration from the vocal element in the stands... but it's hardly as if the home side weren't putting the effort in, or capitulating like a certain Derbyshire side who ply their trade across the other side of the M1 who seem hell bent on giving Dagenham & Redbridge every opportunity to pip them for seventh place.
FT: Notts County 1 v Dover Athletic 0 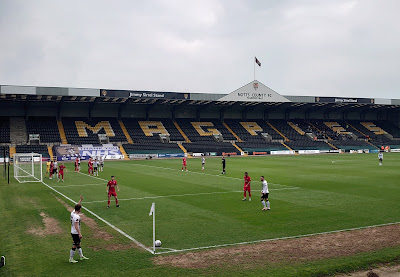 To conclude: on Saturday, County have the opportunity to cement their place in the National League play-off berths, when Altrincham visit Meadow Lane, while Chesterfield can probably consider themselves fortunate that Dagenham & Redbridge face a trip to high-flying Solihull Moors who are still in the hunt for automatic promotion.
It's definitely squeaky bum time for Paul Cook's side who looked to be odds on to head back into the Football League not so long ago... "It's a funny old game, innit Saint!"" 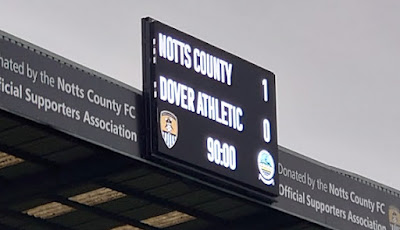 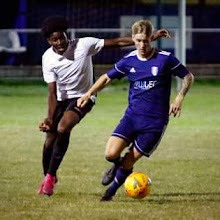 THE66POW is sponsoring Sam Clarke of Retford FC for the 2021-22 season. Good luck to Sam and everybody at 'the Choughs' for the current campaign. 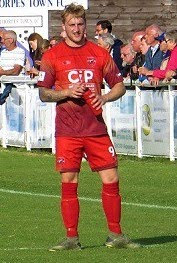 THE66POW is sponsoring Luke Walker of AFC Mansfield for the 2021-22 season. Good luck to Luke and everybody at 'the Bulls' for the current campaign.