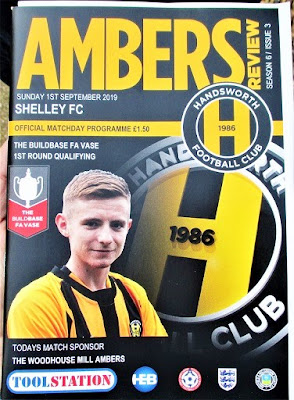 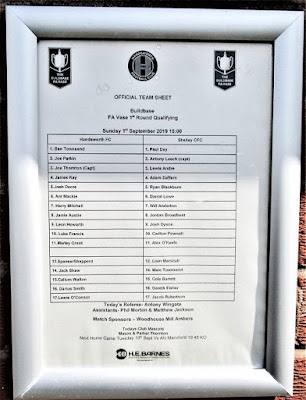 Two goals in each half were enough for Handsworth to see off the challenge of North West Counties League Division One North side Shelley Community FC, in this FA Vase 1st Round Qualifier, that was occasionally prone to get a bit 'feisty' at times.
Subsequently, both sides finished the game with ten men apiece, after the referee: Antony Wingate, dismissed the visitors striker Josh Dyson along with the Ambers play-maker Jamie Austin, for their part in melee at the beginning of the second half, involving a whole host of other players who can probably consider themselves fortunate not to have been given their marching orders too. 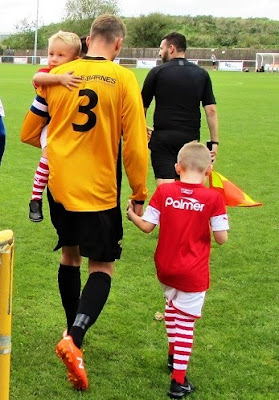 The 'competitive edge' and needle had been simmering just under the surface for a while, when Will Anderton lit the blue touch paper with a badly timed tackle on Joe Parkin, that earned him a yellow card for his transgression.
Joe Thornton and Carlton Pownall had already been booked during the first half, for an off the ball incident.
But the afternoon wasn't all about the aggro and at the hosts played some eye-catching football at times. Not least in the build up to the first goal, when a neat interchange between Luke Francis and Marley Grant, created a yard of space for Leon Howarth to control the ball in his stride, before picking his spot with an emphatic finish, that stung Paul Day's outstretched fingertips on it's way into the back of the net. 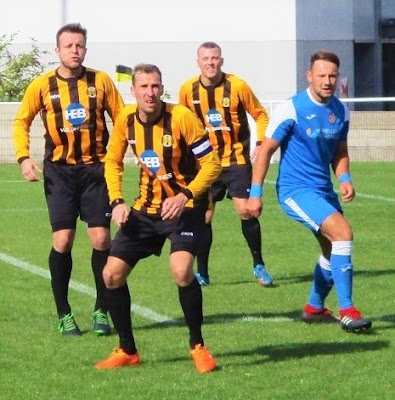 Handsworth's captain Joe Thornton doubled his side's lead on the stroke of half time, when Ben Townsend's long ball forward was flicked on by Francis for Thornton to run onto, but Ryan Blackburn hacked down the Ambers number three and thwarted his run en route towards the Shelley area. But Thornton had the last laugh, picking himself up before stroking a sublime free past Day from twenty five yards out towards the right flank, to put the home side firmly in control.
HT: Handsworth 2 v Shelley 0
The multi-talented John Stainrod, entertained the crowd at half time with an impressive display of pole dancing, is their anything this man can't do!? 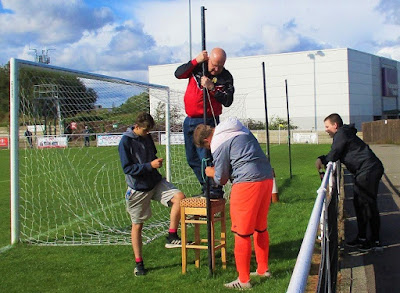 Townsend, the Handsworth goalkeeper, didn't have a massive amount to do all afternoon, but when he was called into action, he dealt with anything thrown his way with an assured confidence, leaving his area when required to act as an extra defender and bravely putting his body on the line for a save at the feet of Anderton, when Shelley were trying to keep the game alive and get back into things. The Ambers number 1 has been around the local football scene for a while now and seems to get better and have a more commanding presence in and around his goal area, every time I see him in action. He's definitely proving to be a great acquisition for Handsworth. As is Marley Grant, who appears to be reaching his peak too. 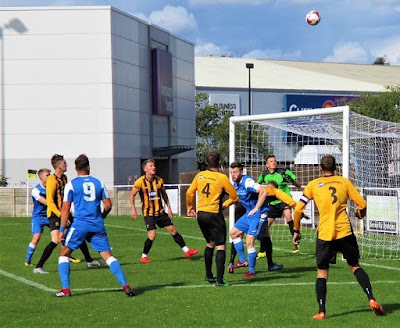 Joe Parkin got on the end of Thornton's delivery, to nudged the ball past Day, to make the game safe with his first ever goal for the first team, to top off an accomplished performance.
Howarth was chipping away around the edges of Shelley's tiring defence while having to endure some (very) close marking and hefty challenges, while Grant took the game to visitors via the wide channels and continued to torment the visitors defence. 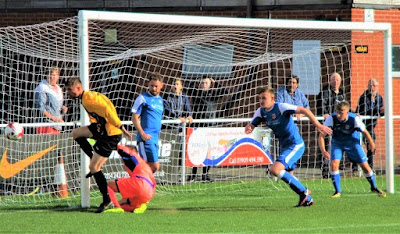 Lewis O'Connor was denied by an excellent reflex save by Day, but deep into stoppage time, Grant collected a forward knock from Josh Dacre, before charging forward, and slotting the ball past the advancing Shelley keeper, to complete the scoring for the afternoon, as Handsworth moved through to the next round of the Vase, in a confident and convincing manner.
FT: Handsworth 4 v Shelley 0 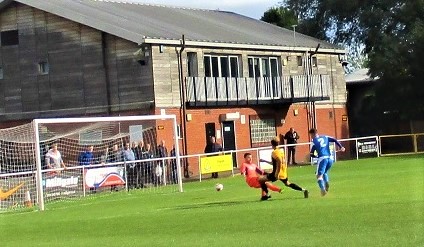 Owing to international call ups, Handsworth don't have a game at the weekend, but they have back to back games at Sandy Lane the following week, when AFC Mansfield are the visitors for an NCEL Premier Division game on Tuesday 10th September and Glasshoughton Welfare roll into town for an FA Vase 2nd Round Qualifying tie on Sunday 15th September. 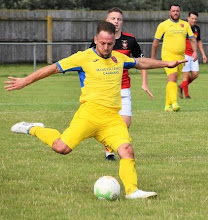 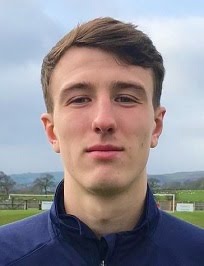