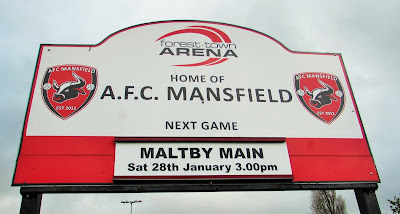 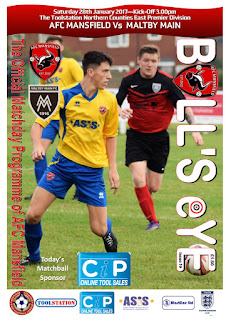 Both of these two sides most recent games, namely: Maltby Main v Hemsworth Miners Welfare in the NCEL Premier Division last Saturday and the AFC Mansfield v Knaresborough Town midweek League Cup game, were covered by this eloquently written and extremely well presented self indulgent bullshit blog with added football content; as was the Miners 3-1 win over the Bulls at Muglet Lane earlier inthe season season.
So it made perfect sense to me, that I should also be present at the next installment of this ongoing local non league saga this afternoon... if for no other reason than to exploit the opportunity to insert four self promoting click on links into the opening paragraph. 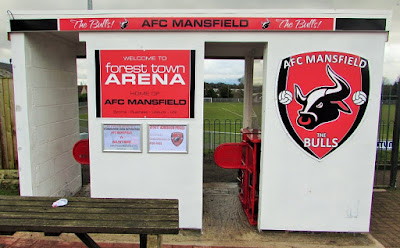 Losing to a ninety fourth minute goal is always a kick in teeth and several of the Maltby contingent were wont to ask where the referee Luke Watson had found so much stoppage time from.
But by applying the letter of the law (as one tends to do when there are NCEL committee personnel watching on) and adding on thirty seconds for each goal scored and every substitution made, then the match officials timekeeping was actually just about spot on.
Ironically, it was the last of those substitutes: Ellis Wall (who signed for the Bulls from Clipstone this week), who was the architect of what proved to be the winning goal.
What a dynamic entrance! 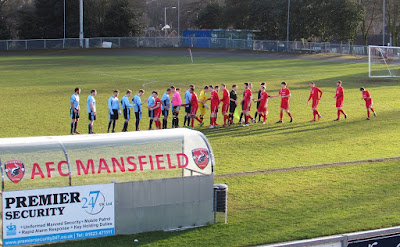 After a scrappy opening five minutes, as both sides weighed each other up, the first chance of the game fell to Conner White, who, in spite of seeing Jason White deal with his shot, grabbed his chance to impress today, with both hands, having been drafted in to cover for Jordan Snodin, who was unavailable.
It must be something of a luxury for Spencer Fearn to have such selection dilemmas, since players returned to the club from elsewhere and a few who had been out through injury returned to full fitness.
Lynton Karkach, who is enjoying a good run of form for the Bulls, worked himself the space to unleash an angled shot from ten yards, but Nicky Darker had anticipated well and made a timely block, on an afternoon hen he caught the eye and put in a real captain's performance all over the pitch. 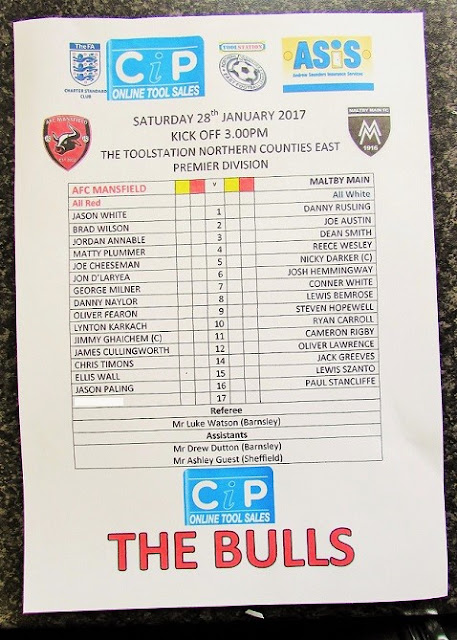 Joe Cheeseman collected the ball on the edge of the area with his back to goal and hit a shot on the turn that rattled the visitors crossbar.
Played switched to the other end and Jon D'Laryea, Matty Plummer and Jason White, were all tested at pieces as Maltby bombarded the Bulls goal area with dead ball (corner and free) kicks from Josh Hemmingway and a series of long throw ins by Nicky Draker.
White in particular, seemed to have the measure of Hemmingway's corner kicks, but while-soever Maltby kept getting the ball into the mix they posed a threat through Ryan Carroll and Steve Hopewell, with Reece Wesley getting up in support.
Cameron Rigby and George Milner were having a wholesome scrap for the ball throughout the first half, along the strip of ground in front of the Mansfield right back Brad Wilson, who himself was adding width to the home side's attack as Karkach looked for him with a range of wide balls. 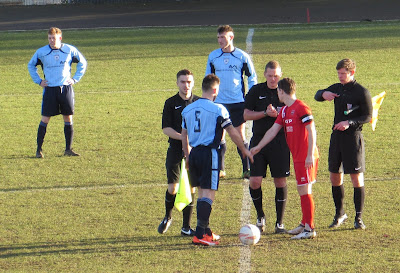 Alas, having put in several half decent crosses towards Ollie Fearon, Wilson limped out the the game at half time with a pulled hamstring.

White spotted Carroll's run into the left hand side of the home sides penalty area, but the Maltby striker probably didn't realise quite how much time and space he actually had as he hooked the ball over the bar as he tried to get his shot away before White could move out and narrow the angles.
Hemingway tried a similar knock into the path of Rigby, but Plummer got across quickly and put the ball out for a corner, which White dealt with easily as Hemingway put the flag kick across the face of his goal.
HT: AFC Mansfield 0 v Maltby Main 0 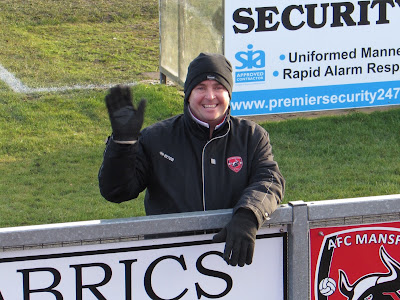 Mansfield made a lively start to the second half, with Fearon and Karkach charging around like Bulls in a China shop.
Fearon crossed to Karkach whose shot was deflected wide and whose corner kick was cleared by Joe Austin.
Karkach then battled his way into the area and went to ground as he challenged Wesley shoulder to shoulder and as the loose ball fell to Fearon, the Bulls number nine crashed his shot just wide.
"Bloody hell referee! Don't you do penalties any more!?", demanded and elderly local.
Hmm... wait and see my friend, wait and see ;-)
Danny Rusling, who has been playing with a confident spring in his step of late, wouldn't have seen much of the ball before he pulled off a a save from Fearon's speculative effort.
Wesley got up in support of the Maltby front line once again and delicately chipped the ball just over the bar from Hemingway's long free kick.
Yes... for purposes of clarification, I just used the words Wesley and delicate in the same sentence. 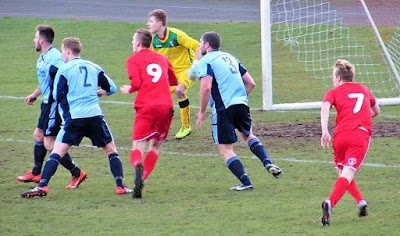 The deadlock was finally broken in the fifty eighth minute, when George Milner hooked the ball across the Miners area from out on the right and Fearon headed the ball back across the face of goal to where, D'Laryea got a touch and forced the ball home from close range.
It probably won't have been the tidiest strike that the former Mansfield Town and Gainsborough Trinity player has ever scored in his entire career, but a goal is a goal.
Ryan Carroll almost responded immediately to the Bulls opening goal, but having broke free on the right, he saw his cross cum shot narrowly clear the bar and land on the roof of the net.
D'Laryea threaded a pass through to Milner who was tackled firmly by Darker and a brief stoppage in play ensued as the Maltby captain twisted his ankle awkwardly, but he was able to carry on and the referee started his stopwatch again. While Ellis Wall entered the fay in place of Milner who was probably feeling the effects of having meet with Darker head on. 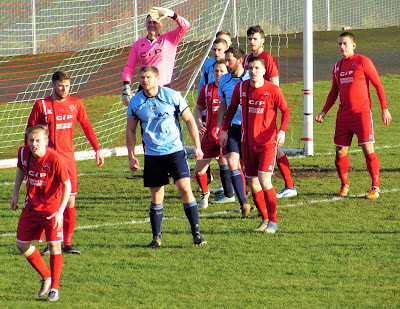 The Miners were on level terms in the seventieth minute, when Darker launched a lengthy throw into the crowded Bulls area from out on the left wing and Wesley got a decisive touch and directed the ball past White.
Steve Hopewell, who has been pivotal to Maltby's recent upturn in results, very nearly put the visitors ahead, but Jimmy Ghaichem had tracked back and put in a last ditch tackle.
"What was is doing back there, is he lost!?" called out the resident octogenarian comic.
An all hands to the pumps scrap for the ball broke out, just outside the Mansfield area and Lewis Bemrose pounced and drilled the ball wide from twenty yards.
Having covered every blade of grass on the right hand side of the pitch for the visitors, Connor White was replaced by Ollie Lawrence for the final ten minutes. 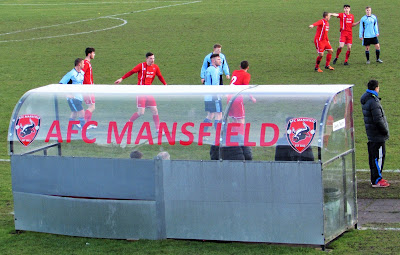 The visitors were grateful to Rusling when he pulled off two good saves in quick succession, the first from James Cullingworth's thumping close range shot after the former Maltby striker Fearon had headed the ball into the second half substitutes path and the second from Fearon himself after Ghaichem had kept the ball live from Rusling's initial save and chipped across the six yard box.
Cullingworth was agonisingly close to grabbing the three points for Rudy Funk's side when he caught out the Maltby defence with a dipping shot from just outside the right hand side of the goal area,but the ball crashed against the top of the left hand post and Maltby were reprieved.
At the other end Carroll almost claimed the game for Maltby, but as he muscled past Cheeseman, he was pulled back as he shot and the ball deflected back to White off of Jordan Annable. 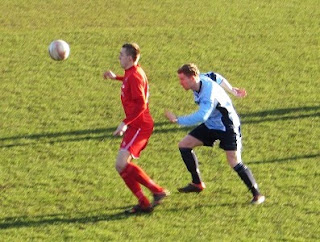 I would never, ever, criticise a player for being too honest, but whenever Ryan Carroll gets a sniff of a strike on goal, you could drive an articulated truck into him and the lad would try to stay on his feet and get his shot in.
It was now the last minute of the ninety and Ryan Carroll spotted a Mansfield counter attack developing and sprinted back into his own half to cut out a forward pass from Karkach for Fearon to run on to, otherwise Rusling would have been left exposed in  a two against one situation.
Four minutes into stoppage time, Cullingworth received the ball inside the Miners area from Ellis Wall and one of the defenders he was backing into scythed the Bulls players legs from under him. It was as blatant a penalty as you or I have ever seen, but not in the opinion of the referee. And he was getting paid to be here, unlike any of us, so...err, he must've been right. 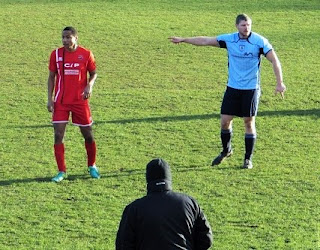 And the outspoken old gentleman from Attlee Avenue had the answer to his earlier question. Does this referee give penalties?
Apparently not.
But Wall had chased after the ball and stayed focused among all of the finger pointing and remonstrating and he played to the whistle and delivered an inch perfect cross to Plummer who buried the ball into the back of Rusling's net, to finish off a very determined Maltby side, right at the death.
FT: AFC Mansfield 2 v Maltby Main 1 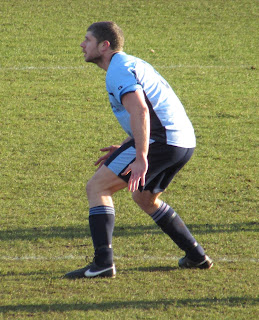 The Bulls next game, will be against Armthorpe Welfare at Forest Town Arena, while Maltby have back to back home games on Wednesday and Saturday, against Staveley (who had a delegation in attendance, running the rule over the Miners today, because their game was postponed, due to a waterlogged pitch at Inkersall Road) and Clipstone, who went down 5-2 at Hemsworth this afternoon, in spite of a goal by the dual registered Mansfield Town work experience player Keaton Ward. 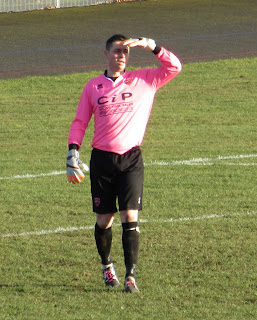