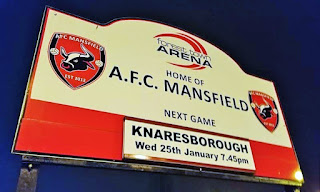 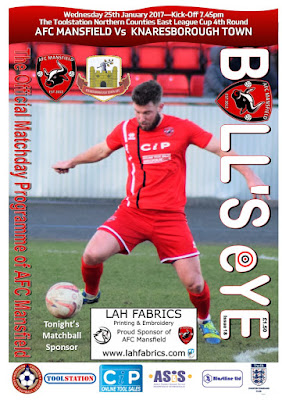 With Clipstone going down 3-2 in extra time at Penistone Church on this spitefully cold night, AFC Mansfield joined Rainworth Miners Welfare and Teversal, who both won yesterday, to become the third Nottinghamshire based club to make it through to the fifth round.
And as things panned out, after a fairly evenly balanced first half, the Bulls eased their way towards a comfortable win after the interval.
Ever so slightly against the run of play, Danny Naylor gave the home side the lead inside the first minute, but the assistant referee, the right honorable James Thornhill of Ilkeston, raised his flag and ruled that a.n.other Mansfield player who was standing in an offside position, was interfering with play and the strike was ruled out.
Personally I think that the linesman's head was still in a muddle after the non stop barrage of abuse he'd had screamed at him by a 'middle aged' couple from Hemsworth on Saturday at Maltby Main, but hey ho! These things balance themselves out... blah, blah, blah.
I had stood up for Mr Thornhill at the weekend, when one of his vocal critics had offered the opinion that he wasn't fit to officiate at a fancy dress game, played between two teams of circus clowns, I had corrected them... because he certainly is ;-)

Colin Heath took up the ball in a good position for Knaresborough and tore forward towards the home side's goal, through the right channel was blocked by Jason White and a fraction after he'd released his shot Grant Allott clipped his heel, causing the visitors manager to have an outspoken at the referee Martyn Fryer, which would prove costly later on when the official decided that he had been subjected to quite enough expletive laiden abuse and eventually ordered Paul Stansfield from his dug out midway through the second half.
But he wasn't the first person from  Knaresborough to see (a straight) red on the night; because that dubious honour belonged to Ben Parkes, who had executed... well not quite but very nearly... Lynton Karkach, with an horrific late tackle, that was as nasty as it was unnecessary.
Thankfully, Karkach was able to carry on following Parke's assault and just for good measure he very nearly scored directly from the free kick that the visitors left back had conceded as a consequence of a rush of blood to his head.
In the meantime, Karkach's former Gainsborough Trinity team mate, Jon D'Laryea went close with a dipping long range shot, but at half time, as the temperature plummeting like a great big rock, the game remained goalless.
HT: 0-0 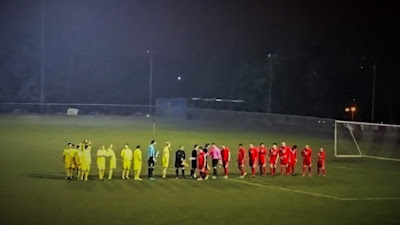 After the break, the Bulls cranked their game up a notch, while the visitors struggled to deal with their numerical disadvantage against a better team from a higher division.
The outcome was virtually inevitable by now... and it was only the question of when, rather than if, Rudy Funk's side would take control of the game and start rattling in the goals that remained to be answered.
The opening goal duly came on fifty five minutes... albeit a fairly curious one.
Because as Ollie Fearon moved forward to meet James Cullingworth's right wing cross, he failed to make a decent contact with the ball and it spun off of his leg and was seemingly destined to clear the crossbar by some way. But in a moment that would grace the BBC's Question of Sport 'What Happened Next' slot, as several players starting walking back towards the halfway line in anticipation of a goalkick and the visitors keeper resigned himself to having to go and fetch the ball backfrom the cycle track that runs around the Forest Town Arena, it dropped sharply, narrowly missing the crossbar and bounced into the back of the net off of the goal line.
They all count! ut if young Mr Fearon tells any of you that he meant it, you have my express permission to tell him to stop fibbing! 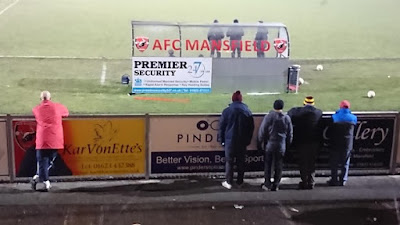 Just after the hour mark, as if to prove that he was much bigger a tougher than he actually looks, Karkach shrugged off the after effects of Parkes first half crunching tackle and twisted and turned just outside the visitors area, before crashing an unstoppable shot past Jack Rushworth to double the Bulls advantage.
D'oh! I was hoping for extra time and penalties because I've never seen a game of football played out in an ice tomb before.
But it was a great finish and worthy of putting the game beyond the ten men of Knaresborough's reach, so I'll let him off... this time.
The Bulls defence were doing the few bits of mopping things up at the back well, as it became more and more obvious that the visitors were on a hiding to nothing. I actually felt sorry for the visitors secretary, committee people and supporters, because they always come across as a friendly bunch whenever our paths have crossed. 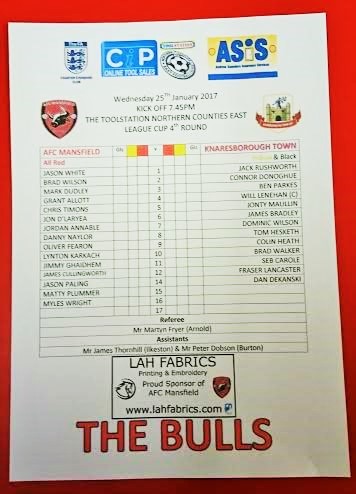 Cullingworth shot wide when he was well placed,but it wasn't going to have an adverse effect on the outcome of the game now, especially when the visitors manager finally touched the referee's raw nerves once too often and was sent on his way.
Besides, with eight minutes remaining Cullingworth atoned for his miss and put the game well beyond the reach of the visitors with a third goal for Mansfield, who comfortably saw the game out, while a dejected looking Knaresborough looked resigned to their fate and will probably be grateful that there was only a minimum of stoppage time added on.
Karkach almost added a fourth goal for the home side, but his long range shot crashed off of the left hand upright... and that was that!
FT: AFC Mansfield 3 v Knaresborough Town 0

The Bulls have a tricky fixture at the Forest Town Arena this weekend against an in form Maltby Main, while play off chasing Knaresborough have a home game against ninth placed Selby Town to look forward to in the NCEL Division One.
There is a distinct probability that I will be at one of these games.
Ta very much to Jane Wilson for the strong and restorative hot cup of coffee when I arrived at tonight's game.
That whatisname is a very lucky bloke ;-)
Posted by Davy Lamp at 22:29