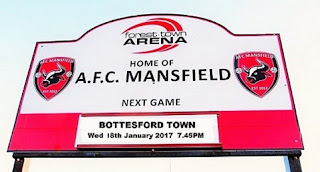 When these teams last met, back in August at Birch Park, Bottesford shaded the game, between (what were then) these two newly promoted sides, by two goals to one,
In the run up to tonight's encounter, the Poachers were sitting just a solitary point (and one league position), above their hosts in the NCEL Premier Division table; so a close game was anticipated... and that was pretty much how things panned out, during the first half at least, with both team's experienced goalkeepers: Jason White and Jody Barford seeing plenty of the ball and pulling off a number of instinctive saves to keep the score line goalless at the interval.
The Bulls recently added a two year extension to the existing contract of their proven and successful manager: Rudy Funk, which gives both parties the base of some much needed stability to build on, towards their mutual longer term ambitions... and tonight, following Funk's half time team talk and the introduction of Grant Allott from the bench in place of the home side's captain Danny Patterson at the interval, Mansfield upped the ante and ran out deserved winners, as Bottesford were left to rue a string of missed chances, especially before the break.
I would actually go as far to say, that tonight's second half performance was as good as I've seen the Bulls play in absolutely yonks! 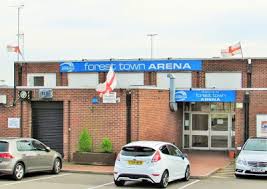 Ollie Fearon and Lynton Karkach both went close in the opening exchanges, while Karkach found the back of the net from Jimmy Ghaichem's knock across the six yard box from out on the right, but the pacy former Gainsborough Trinity player had strayed marginally offside.
Gaz Barlow had two attempts on the Bulls goal inside the space of a couple of minutes, but his initial effort, from eighteen yards fizzed past the left hand upright, while Jason White took the sting out of his second strike from just inside the area, at full stretch, before Matt Plummer made a last ditch clearance of off the goal line.
Danny Naylor unleashed a long range shot, that had neither the power or accuracy to trouble Barford, but Fearon went muchcloser to breaking the deadlock from the Bulls next attack, when  he guided Ghaicgem's delivery just past the left hand upright.
Danny Gibbons was impressing out on the right for the Poachers and he got in round the back of the Mansfield defence twice, but Plummer and Joe Cheeseman are developing a really good understanding in the middle of the back line and they stood strong and cleared away the danger, that Gibbons' crossing was creating.
It is also worth mentioning how well Brad Wilson played at right back for the home side tonight. 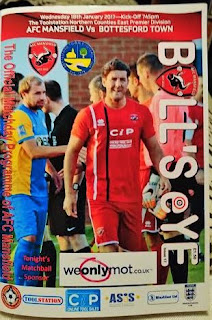 James Cullingworth took an age over lining up his angles for a free kick, some twenty five yards from the visitors goal, but got too much contact under the ball and scooped his effort well over the bar.
Five minutes before the break, Josh Nichol created the best chance of the half, when he threaded a pass into the path of Danny Boulton,whose rasping shot on the turn forced, an excellent save out of White.
Moments later, it was Barford's turn to show his prowess between the sticks, when Fearon danced past two challenges but saw his shot turned round the post by the visitors keeper.
In first half stoppage time, Boulton picked up the ball and motored towards the Bulls goal, but being mindful of Plummer tracking his run. the Bottesford number nine probably didn't realise just gow much time he had on the ball and he rushed his shot and hit a gilt edged chance straight at White.
HT: Bulls 0 v Poachers 0 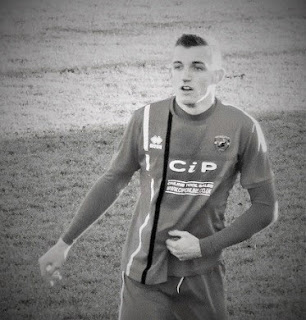 After the break, although the Poachers were still chipping away, without making anything like as much headway as they had done in the first half, while their hosts began to rise in stature and impose themselves on the game, using their width to good effect when Ghaichem pushed forward on the left and picked out Fearon with a pinpoint cross, which the Mansfield striker placed past Barford, with a well placed, (textbook) downwards header.
The goal knocked the stuffing out of the Lincolnshire side and Ollie Donald had to make a last ditch clearance as Karcach battled his way into the goalmouth with a mazy run.
And that man Fearon all but put the game out of the Poachers reach, when he took on the ball and the initiative to surge through the right channel, before unleashing a pile driver of a shot into the top right hand corner, that was only ever destined for the roof of the net the moment it left his boot.
A quality strike... and then some.
The flow of the game took a temporary respite, as both managers looked to shuffle their respective packs to make the most of the remaining time, but the Bulls were soon back in the ascendancy. 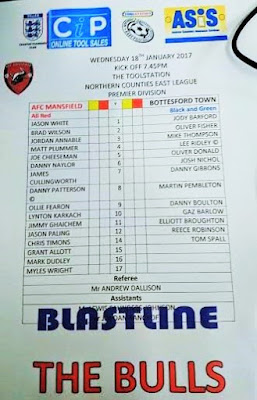 In the seventy seventh minute, following a  spell of sustained pressure from the Nottinghamshire side, Cullingworth took the ball down on the left hand side of a crowded penalty area and threaded a precision shot through the narrowest of gaps, that crept just inside the left hand upright to seal the win for Mansfield.
In the end it was a comfortable and convincing win for Rudy Funk's men, thanks to three well taken goals while they were on the front foot after the interval.
Bottesford had more than played their part in a compelling contest, but must have wished that they could have taken something from their first half endeavours, when the game was more even, because once Fearon had nudged the Bulls ahead, there was only ever going to be one outcome, particularly after the Mansfield centre forward had netted that phenomenal strike to double his side's lead.
FT: AFC Mansfield 3 v Bottesford Town 0
Get well soon to my good pal Pete Craggs, the Bulls Matchday Secretary and man of many talents, who was absent tonight; having sustained an injury!
His temporary replacement was a natural and did 'alright on the night' after being drafted in at the eleventh hour.
It was pleasure to be able to help out ladies and gents... just this once ;-)
Posted by Davy Lamp at 22:22