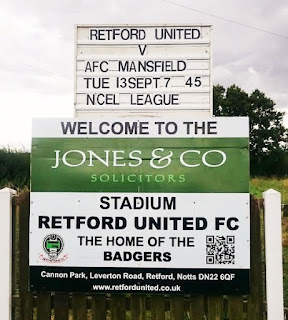 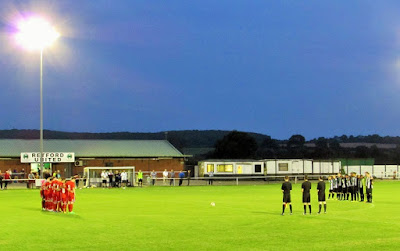 The local non league scene and the extended far reaching football family at large, was stunned last night, to hear of the death of Dan Wilkinson, who had collapsed on the pitch at Brighouse Town while playing for Shaw Lane A.F.C. having suffered from a suspected cardiac arrest.
Sincere condolences to Dan's family, friends and loved ones, Shaw Lane A.F.C. and Brighouse Town... and everyone else who has been touched by this terrible tragedy.
An immaculately observed minutes silence was held before tonight's game at Cannon Park as a mark of respect to Dan. 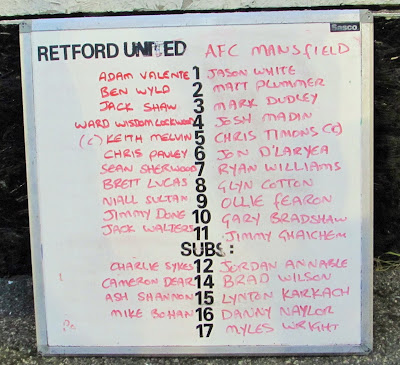 The Badgers went into tonight's game off the back of two local derby wins on the road, against Ollerton Town in the FA Vase and Worksop Town in the NCEL Prem, which will have lifted the spirits of their long suffering supporters, who haven't really had a lot to smile about for quite a while now.
The visitors have won three and lost three of their opening six league games. For the record, I was present at four of those games, including all three of their defeats.
However Rudy Funk and Micky Taylor's side have embarked on an impressive FA Cup run in the meantime, where having already seen off Shepshed Dynamo, South Normanton Athletic and Stratford Town, they now face a tricky away trip to Coalville Town of the EvoStik Northern Premier League on Saturday.
If I wasn't cramming two games in over Grimsby/Cleethorpes way at the weekend, I would be there to see if the Bulls could get a result, but good luck to everyone connected to AFC Mansfield anyway. 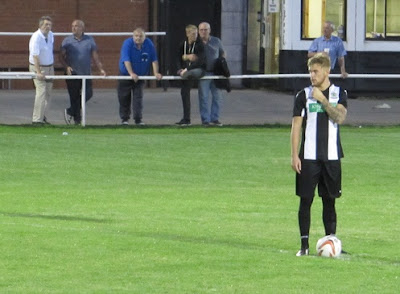 Sadly the whiff of rumours and politics currently permeates within all of the nooks and crannies of Cannon Park, once again, while little cliques (steering groups apparently) whisper among themselves in each and every corner.
But it's been that way round these parts for a long, long time now... and I doubt that it's about to change any time soon.
As I might have mentioned previously, when I have been offered the opportunity to get involved at Retford United on a couple of occasions in the past, it is my firm belief that their ground stands on the road that leads from my house to Rampton Mental Hospital for a reason.
Surely that can't be a coincidence, can it?
Keep your eyes peeled 24/7/365 if you gravitate around the local football circuit and get a bit too close to the core issues for your own good sometimes, there are clues and warning signs to be had in an abundance, if you look in the right places. 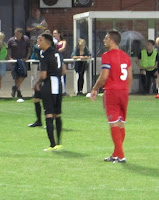 But I'm meandering and jabbering on (as I am prone to do), so lets get this overview of Retford United v AFC Mansfield back on course:
Whoever you listen to seems to have a different take on what is really going on at Retford United at present.
So tonight, I visited the 'Jones & Co. Arena' on the prerequisite that I would not to listen to anything except football talk, politics were strictly taboo and I was simply here to watch two teams playing out an approximate variation of the beautiful game.

United got the game underway but it was Mansfield who created the first opening when Gary Bradshaw ran onto a long ball from Mark Dudley, but having found himself with just the goal and Adam Valente ahead of him, scooped his shot into the car park.
Bradshaw was keeping the Badgers defence busy in  the opening exchanges and he held the ball up well on the edge of their area before passing out wide to Jimmy Ghaichem who picked out Ollie Fearon with a right wing cross, which saw Valente save from the prolific strikers initial shot and the rebound ricocheted over the bar off the Bulls number 9. 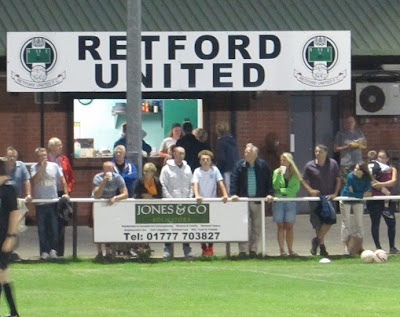 The Badgers captain Keith Melvin was battling well at the back, in what was obviously his second scrap of the day, having already come second to a sadistic barber earlier in the day.
Bradshaw broke forward towards the Retford goal through the left channel, but Melvin got across and halted his run with a thundering interception and clearance that possibly knocked a cow out cold in the adjacent field... though that might be a very slight exaggeration on my part.
On 18 mins the visitors grabbed the lead when Ryan Williams shot on the edge of the area was deflected into the air and Ollie Fearon was on hand to plant a header past Valente.
The home side had an opportunity to level things up almost straight away, but Sean Sherwood couldn't keep his shot on target after some good work on the left from Jimmy Done.

Bradshaw tried to catch Valente out with a long shot, but the ball cannoned back off the crossbar and the experienced keeper was able to gather it comfortably after his let off.
Ryan Williams, as per usual, was providing a steady stream of ammunition for the visitors in the final third, but when he picked out Fearon at the back post with a cross from out on the left, Retford closed ranks and smothered the visitors attack.
Right on the stroke of half time it was Williams who played the role of provider again, when Chris Timons timed his run well to meet his former Stags' teammates left wing free kick but he directed his header just wide of the right hand upright.
HT: Badgers 0 v Bulls 1 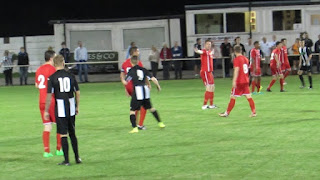 Jack Walters and Jimmy Done were both showing some good touches as they combined to create chances for Niall Sultan and the Badgers rotated the two play makers as they looked to get back into the game.
Sultan chased the ball towards the edge of the Bulls goal area but Jason White was out quickly to deal with the situation.
Mansfield launched the ball forward as they adopted a direct approach, but when Fearon steered the ball wide to Williams, Chris Pauley was well placed to deal with the resulting cross.
The next goal grew in importance as a barometer as to which way this game was going and Fearon went close to stealing it when his  angled shot across the face of Valente's goal deflected wide of the right hand upright.
Retford edged forward and Sherwood picked out Sultan with a well aimed forward pass, but White came out to the edge of the area and thwarted the Badgers striker. 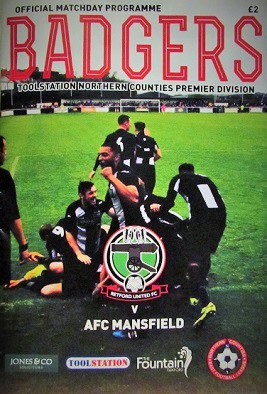 With the Badgers focusing on getting a goal back at one end, they were guilty of a momentary lapse of concentration at the back which allowed Fearon to drag the ball through the right channel before drilling a low shot past the advancing Valente to give the Bulls a two goal cushion in the 64th minute.
The celebratory visitors took their foot of the gas for a moment from the restart and Jack Walters threaded a precision pass through the Mansfield defence to Sultan, who took the ball round the stranded Bulls keeper White, before rolling the ball into the net to unguarded net.
Bradshaw had two good chances for the visitors, but he couldn't get a clean connection on Jordan Annable's cross when he looked odds on to score and he diverted a back post header into the side netting from Williams' left wing corner. 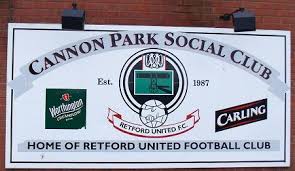 Glyn Cotton finished emphatically from just outside the area, when Williams shot, that was going wide, rebounded into his path off of a defender and the visitors had their two goal cushion back with fifteen minutes left to play.
It was almost 1-4 to the visitors but Jack Shaw cleared off the line from Annable's right wing corner.
Sultan was probing and looking tofind a way back into the game for Retford, but Josh Madin had adopted him as a Siamese twin and wasn't giving the Badgers striker any room to manoeuvre now.
The Retford centre forward did manage to get a touch on Shaw's cross, but although some of the home support were on  their feet cheering because they thought he'd scored, the ball actually went a fraction past the right hand post.
United finished with a flurry, but the Bulls stood their ground and preserved their lead.
Sultan with his back to both the goal and his ever present shadow Madin, laid the ball off sideways to Cameron Dear who lost his footing as he was about to shoot, and inside the final minute Mansfield cleared the ball to safety after Melvin had guided it over White and into a crowded goalmouth.
FT: Retford United 1 v AFC Mansfield 3
AFC Mansfield had just that bit too much quality and experience at the end of the day as they saw off Darren Giovannetti's side, but there was on obvious improvement in the way the Badgers played tonight, since the last time I watched them in action.
Posted by Davy Lamp at 22:30