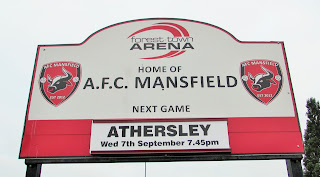 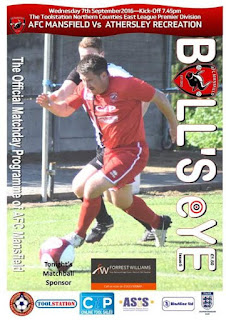 First things first; I would like to wish Sean Margison, the 'Rec manager, all the best for a speedy recovery after his recent operation and I hope that tonight's result, that saw third placed Athersley (yes you read that correctly) establish a four game unbeaten run, helped to cheer him up.
It was a case of 'after the Lord Mayor's Show for Rudy Funk's side, with the Bulls soaring after their weekend FA Cup heroics against Stratford Town, before they crash landed on their backsides with a resounding thud tonight, as Athersley made them look very ordinary, before claiming all three points with a well taken goal from Sam Bebbington late in the game, when it had looked as if a goalless draw was on the cards.
The game commenced in a manner that was akin to a typical England international fixture, with both teams seemingly happy to sit back and knock the ball around in the comfort zone, weighing up their respective opponents and patiently waiting for a risk free opening to present itself... and waiting and then waiting some more. 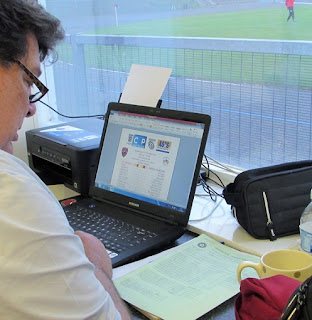 The first real opportunity of the first half fell to Matty Plummer, who powered a back post header over from Ryan Williams left wing corner.
Williams delivered a good number of corner kicks, free kicks and measured crosses into the Penguins penalty area, but Martyn Scully and Brad Kilburn impressed at the back for the visitors and defended well, also dealing with a regular supply of long kicks towards Ollie Fearon and Gary Bradshaw from the Mansfield keeper Jason White.
Glyn Cotton drilled a free kick against the visitors defensive wall and Williams reached the rebound first and slipped the ball through a gap that had opened up, but with Fearon homing in Kilburn cleared the ball off the line.
Josh Madin inadvertently put White under pressure when he headed the ball back to his keeper, but had missed Ryan Smith following through on his blind side, it was untidy for a few moments, but a relieved White emerged from the ensuing tussle holding onto the ball. 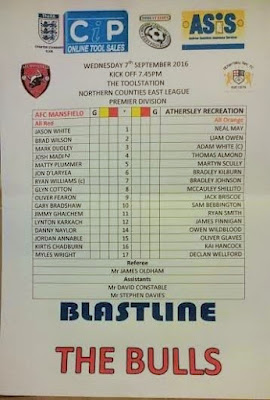 Williams did his stuff out on the left flank once again and played the ball sideways to Bradshaw, whose shot on the turn but was saved by Neal May.
Sam Bebbington almost capitalised on a moment of indecision at the back, with the home sides defence standing off and leaving the responsibility of hooking the ball away to safety to each, but White had seen the 'Rec strikers run and came off his line to block the resulting shot.
Ryan Smith only had the Bulls keeper to beat after he was put clear through on goal by McCauley Shillito, but White turned the ball away well at the expense of a corner.
The Mansfield keeper might occasionally have a rush of blood to his head when he leaves his goal area and morphs into an outfield player, but there aren't too many other keepers in this league on a par with him when it comes to shot stopping. 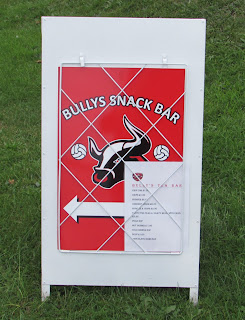 Brad Johnston connected with the ball from the resulting corner, but White was down quickly to his right to make a save down by the upright.
Athersley had another chance right at the end of the first half, but with the referee consulting his watch, Johnston teed a shot up for Tom Arnold but he couldn't keep the ball on target.
HT: Goalless
I strongly suspect that that nice Mr Funk had a quiet word with his team at half time. cajoling and encouraging them in a calm and relaxed manner, while politely asking if they might want to put a bit more emphasis on trying to win the game after thye break... or similar!
Because the Bulls were definitely pumped up when they came out for the second half.
But in spite of a sustained spell of pressure from the home side, the score remained nil-nil.
Bradshaw's dipping free kick cleared the bar by a couple of feet, Jimmy Ghaichem cut in from the left flank but drilled the ball wide of the post and Williams left wing cross (part 16 in a series of 21) was flicked on by Cotton towards Fearon but May tipped the ball over his goal and away to safety.
Bradshaw charged forward but came second in a race for the ball, that May cleared up the field.
Fearon took the ball to the byline through the right channel and his cross from a tight angled bounced of the crossbar.
Currently Kai Hancock id the league's top scorer, but he started the game on the visitors bench because he was carrying a knock. When he was introduced into the fray with twenty five minutes remaining, Athersley suddenly had more attacking options and a spring in their step. The visitors clearly weren't happy to settle for a draw away from home against a very competent side, they were actually trying to win the game. 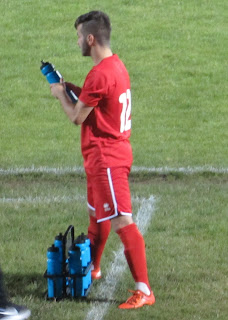 Ryan Smith put on a burst of pace as he charged into the Bulls area, but the ball got slightly away from him and White cleared.
Adam White, picked up the ball in his own half and impressively carried the ball forward for forty yards, before over hitting his pass forward to Briscoe, having done the hard part of blazing a trail through the left hand side of midfield.
Hancock hit the outside of the post from Smith's through ball and moments later forced White into having to clear his lines.
Lynton Karkach sprinted forward downthe left flank, leaving  the 'Rec right back in his wake, but he crossed before looking up and none of his team mates had kept up with him, not that the three visitors defenders who were well positioned to clear the danger seemed to mind.
Smith once again released Hancock with a defence splitting pass, but he put his shot into the side netting.
White demonstrated his Jekyll and Hyde tendencies, when he ran from his box with the ball straight into Ollie Glaves, but still (just about) managed to get the ball away at the second attempt, then within thirty seconds he pulled off a top drawer save to deny Glaves a goal.

The home side could sense the game slipping away from them and mounted a couple of attacks of their own, May pulled off a great save to keep Bradshaw at bay after Plummer had picked the Bulls striker out with a sublime forward pass.


Then Karkach forced a corner for the home side out on the right hand side, Ghaichem delivered an inviting flag kick towards Cotton but he headed over with the goal at his mercy.
Liam Owen picked up an attempted clearance and White was at full stretch to keep out his first time shot.
Hancock attacked down the left flank and slid a pass inside to James Finnegan who deceived his marker into thinking he was going to shoot before rolling a short pass to Johnston that he nudged into the path of Bebbington, who crashed an unstoppable shot past White to give the visitors the lead late into the game.
It was too late for the home side to salvage anything from the game now and Athersley saw the remaining minutes out to claim all three points.
FT: AFC Mansfield 0 v Athersley Recreation 1 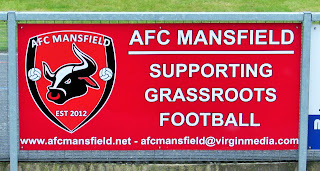