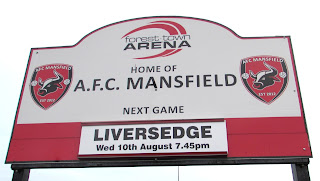 One of the annoying aspects of the NCEL, is the midweek traffic hold ups that invariably occur on the A1 and M62, in both directions, in midweek, that all too often prove to be problematic for players and supporters alike, who are trying to cover middle distance treks after finishing their daytime jobs.
Obviously the league has no control over the traffic flow on the Queens highways, or the weather that will inevitably cause travel problems later in the season, but if I could just make one small but significant point:
Clipstone were playing at Thackley last night and tonight's kick off was delayed because Liversedge struggled to get to Forest Town on time because of congestion on the motorways.
Thackley is 11 miles from Liversedge and AFC Mansfield play less than two miles away from Clipstone. Both of the AFC Mansfield v Clipstone and Liversedge v Thackley local derbies are being played on Saturdays. Just saying. 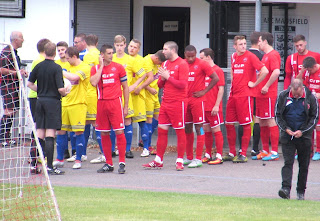 Jason White ended the night being awarded with the man of the match, but he almost created an opening goal for Liversedge early in the game, when he miscued a clearance straight into the path of Vaughan Redford, but the highly rated 'Sedge' youngster side footed the ball narrowly over the bar.
Lynton Karkach, who I am sure Gainsborough Trinity will regret letting go, showed good pace out on the right before delivering a cross to the feet of Ollie Fearon who air kicked as a great chance went begging for the Bulls.
Rhys Davies, who came through from Liversedge's Under 19 team with Redford, was thwarted by White and Grant Allott cleared the loose ball away.
Danny Patterson fouled Davies out on the right wing, not far from Mansfield's bench. Brandon Kane picked out Joe Walton with the resulting free kick, but the big front man headed wide... err, for a throw in on the far side of the pitch. 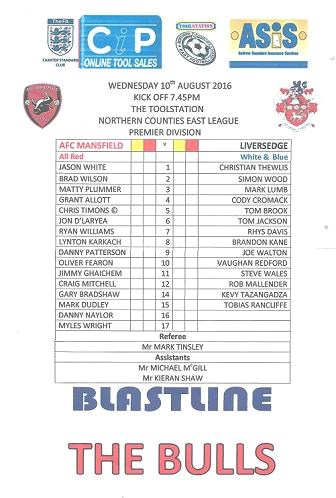 Young Davies tried his luck again and wasn't far away as his long range shot fizzed past the right hand upright.
But the Bulls scored their first ever NCEL Premier Division goal on twenty minutes, when 'the pocket rocket' (as he was called when he was a Mansfield Town youth player and England U18 international), Ryan Williams, fresh from scoring two goals in the Bulls 4-0 FA Cup triumph at Shepshed Dynamo on Saturday, found the top corner of the net, via Christian Thewlis' outstretched fingertips, with a well executed free kick from around twenty yards.
There are those who say that 'Ryno', at 38, is too old to play at this level, but there used to be doubters who said he was too small to play in the Football League back in the day, but none of that silly talk ever bothered Ryan and he's still obviously got plenty to offer. Keep on keeping on pal!
Two minutes after Williams' opening goal 'Sedge' had the opportunity to pull things level from the penalty spot, but White turned Redford's well struck kick onto the post then caught the ball from the rebound. 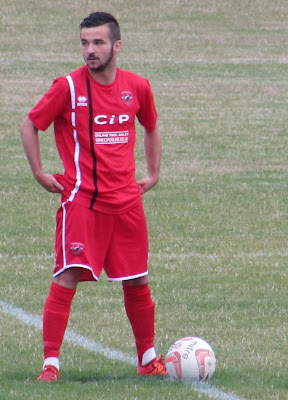 Williams was involved again in the second goal when Ollie Fearon headed the diminutive play makers thirty five yard free kick past Thewlis to double the home side's advantage.
Liversedge were still proving to be a good test for the premier division newcomers however and White had to move quickly from his line to smother the ball at Redford's feet... and the visitors pulled a goal back on thirty minutes, when Walton headed a left wing corner back across the face of the Bulls goal and the ball ended up in the net, just inside the left hand post.
Jason White denied Redford twice as 'Sedge' upped the ante, initially turning acrobatically in the air to turn the lively front man's header from Davies' cross  away, then moments later managing to keep out a cheeky close range back heel from yet another quality ball from Davies.
White and Brad Wilson combined to clear the ball as both Walton and Steve Wales bore down on the Bulls goal.
The visitors went close again, when Walton made himself a yard of space and unleashed a shot from just outside the area, but the ball flew wide of the target.
Williams was still delivering quality balls into the Liversedge area, but the nearest that the Bulls came to scoring again in the first half was when Fearon shot wide fron twelve yards.
HT: Bulls 2 v Sedge 1
At half time, one of the Mansfield players parents came over to me and said "How the effing hell are we winning that!?" A good point well made. 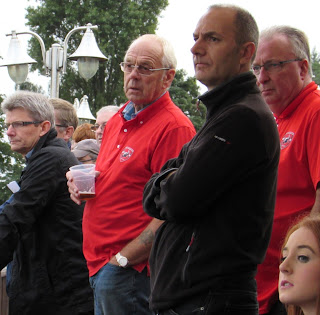 I suspect that AFC Mansfield will need the decorators in this week to repair all of the blistered paintwork in the home team's dressing rooms caused by Rudy Funk's half time team talk. He is one of the friendliest (and funniest) football mangers I know, but he isn't renowned for holding back when he feels that some of his team haven't been putting in 100% for him.
Either way, the Bulls came out after the interval looking far more focused.
Fearon knocked the ball wide to Brad Wilson who delivered a cross to Karkach, but the ball skimmed off of his forehead as he dived to meet it.
Williams switched play from right to left and Fearon headed wide from Matty Plummer's cross.
It certainly looked like another goal was on the cards any time soon, but Liversedge surprised everybody by claiming it to quell the home supporters optimism after a lively start to the second half from their side.
Rhys Davies raced forward after a long ball, narrowly evading being flagged offside (apparently) before taking the ball wide of the advancing Bulls keeper and rolling the ball into the back of the net from an angle.

Gary Bradshaw entered the fray for the Bulls and almost scored with his first touched, but he drilled his shot just wide of the upright.
Steve Wales attacked at pace down the left flank and picked out Walton with his cross, but White had read the situation well and pulled off another agile and vital save.
Williams, yet again, put another measured cross into the mix, but Jimmy Ghaichem's close range shot was cleared away at the expense of a corner. Liversedge cleared their lines, but the home side were soon back on the attack and Ghaichem's cross was headed behind by Tom Brook and Chris Timons headed over from Williams corner kick.
Ghaichem was flattened by Walton running into him while he was trying to take a throw in and the Liversedge player was shown a yellow card for his rather curious challenge.
Davies used his pace again to leave the Bulls back four flatfooted as he charged forward in pursuit of Redford's through ball, but White sprinted thirty yards from his area and adapted well to the sweepers role as he tidied things up in a Beckenbauer-esque calm and collected manner. The long clearance was picked up by Wilson who found Bradshaw with a raking pass, in front of the 'Sedge' goal, but the Bulls sub headed wide. 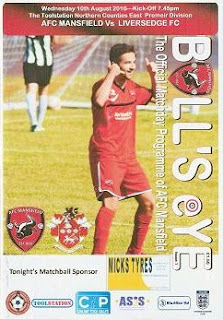 This lively game could have gone either way, but Bradshaw found the winning touch on 69 minutes when he diverted Williams pinpoint cross into the right hand corne.
Wilson picked out Fearon with a deep ball into the visitors goalmouth, but Thewlis saved well.
Meanwhile, played switched to the far end and Timons was blatantly pushed off the ball by Walton has he shepherded the ball back to White... but, amazingly, the referee saw nothing in it and Walton crossed to Davies who spanked his close range effort against the post.
Liversedge probably deserved something out of this game, but not from that particular moment of action.
In the final minute, Wilson moved swiftly to cut out a final fling of the dice from the visitors down their left flank and set the wheels in motion for Danny Naylor to break free, but nobody could get a touch onto his cross into Thewlis' six yard box and the referee blew for full time.
FT: AFC Mansfield 3 v Liversedge 2 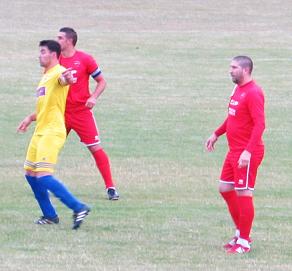 The Bulls won their first ever NCEL Premier Division game, but Liversedge slugged it out with them every inch of the way.
Goals won't be in short supply whenever these two sides play this season, but though their attacking endeavours provided an entertaining spectacle and they'll both score a lot of goals, on the evidence of tonight's showing, they'll need to tighten things up at the back or they'll be conceding a fair few too.
The Bulls keeper Jason White was named as man of the match, for his string of great saves and that is understandable, but I'd make him share his award with Ryan Williams.
At the weekend, Liversedge will be hosting Armthorpe Welfare, while the Bulls have a tricky fixture to negotiate up in Starbeck against Harrogate Railway Athletic.
Posted by Davy Lamp at 22:16