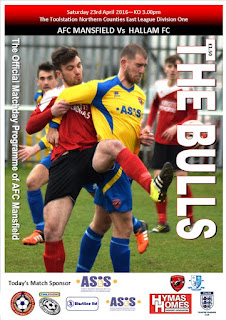 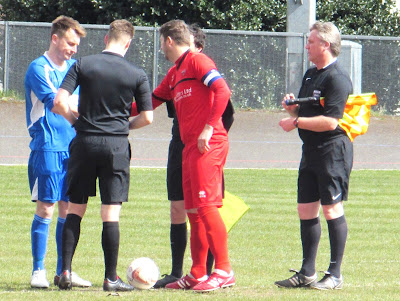 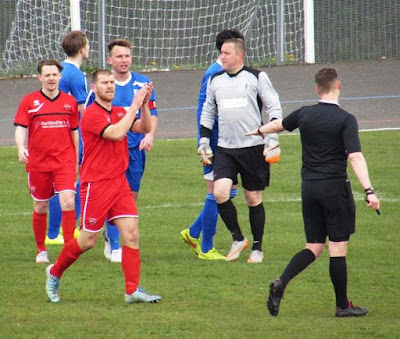 The scene is set, both teams have already reached this season's NCEL Division 1 play offs, but AFC Mansfield needed another point today to clinch automatic promotion as runners up, though if truth be told, they effectively already had, unless they lost today and third placed Bottesford Town won their remaining games by a zillion goals to nil (or something getting on that way).
I had predicted a 1-1 draw this afternoon at the Forest Town Stadium, with whoever scored first standing back and allowing the opposition the freedom of the pitch to score an unchallenged equaliser. As it panned out, the level of detente on display wasn't actually that blatant... well not quite! 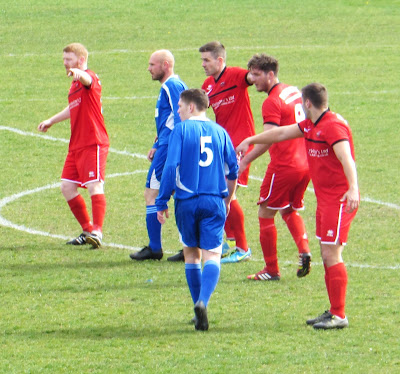 So an edgy game ensued. Whereby the Bulls didn't want to give anything away, but, that said, they could probably point to their keeper Jason White and credit him for keeping a clean sheet, as he made four good saves... and there was one goal line clearance to thrill the assembled crowd, while the referee missed a stonewall penalty decision, when Tom Whittaker pushed Craig Mitchell over inside the visitors goal area with both hands. But possibly the referee had this one down for a draw on his coupon too.
It would be an exaggeration to say that both teams had already shaken hands on a draw prior to kick off, but as the game petered out towards the end, it was fairly obvious that there was a mutual feeling on contentment as the pair of them happily settled for one, as such a result did neither of them any harm. 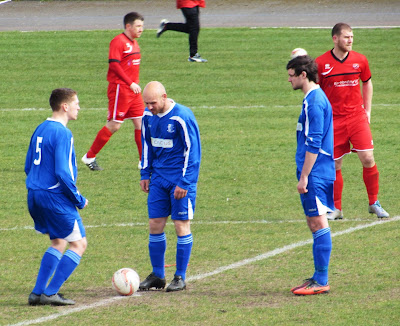 The two teams had done all they really had to do already over the course of the whole season, so when all is said and done, they deserve all of the plaudits on offer for that.
Other than that... hmm, I've not really got anything to add about the actual game, played out between one of the newest clubs in local non league football and the second oldest team in the entire world.
The respective managers Rudy Funk and Ryan Hindley have done a great job this season, so hats off to them.
I'm really pleased that these two like-able characters have both had a successful campaign.
AFC Mansfield ground out the result they needed and Hallam have got more important matters to attend to, when they face Bottesford Town away in a NCEL Division 1 play off semi final on Wednesday night... a game that will hopefully have more to write about then than today, should I happen to head due east in midweek.
Fingers crossed that the Hallam striker Michael Blythen (I work with his dad), was only taken off midway through the first half as a precautionary measure, so he didn't aggravate his injury, with the big game at Birch Park only a few days away now.
Man of the match: Harry Bamforth (Hallam), good luck to his dad's team in their U19 cup final this coming week. 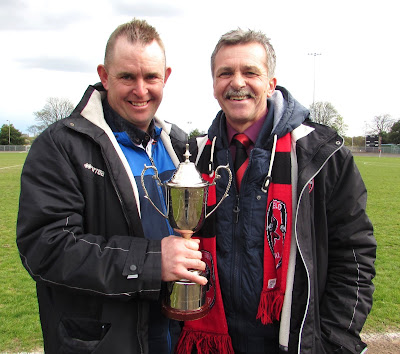 Congratulations to AFC Mansfield on winning automatic promotion, finishing the season on the back of an 11 game unbeaten run... and bestest wishes to all the sides who must now slug it out against each other in the play off lottery, to see who grabs the remaining promotion spot. 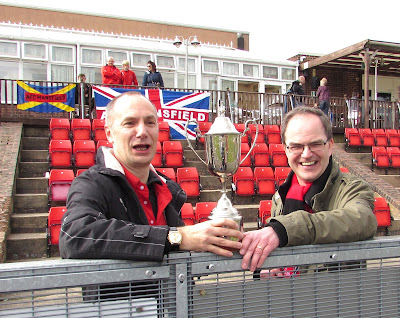