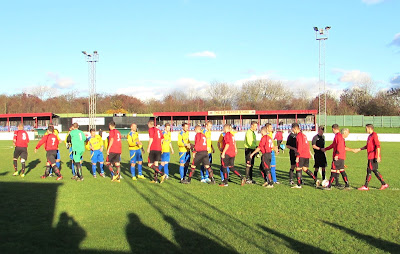 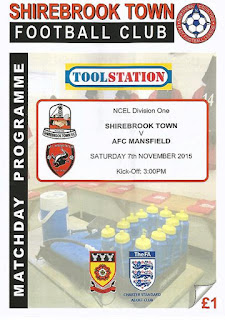 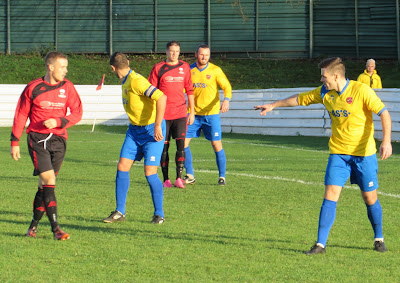 Today's attendance of 220, was the highest in either of the NCEL divisions this afternoon.
By 4.50pm many of that impressive turn out must've wished they had gone elsewhere instead.
Shirebrook Town, under the guidance of new manager Russ Eagle, had slightly more of the play in this disappointing game, that failed to live up to expectations and turned out to be the kind of gruelling stalemate that tends to get 0-0 draws a really bad name. But the Langwith Road club couldn't find a clear path to goal, through a dogged, determined and at times very crowded AFC Mansfield rearguard.
A flurry of cards, one red and 7 yellows (all for the visitors, apart from two yellows) punctuated this Derbyshire v Notts local derby fixture, described on the local radio station by one unimpressed onlooker as "turgid"
All three teams, namely: Shirebrook Town, AFC Mansfield and the match officials, struggled to put in anything like a convincing performance all afternoon.
Sometimes, when you know a lot of people at local football clubs and have a number of good friends scattered around some of them, which was especially true this afternoon... it is awkward to write anything from a neutral perspective, even about the poorest of games, for fear of upsetting anyone. 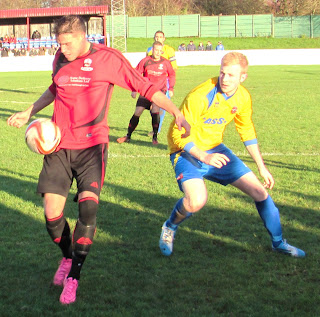 But, the majority of those people come up against a daily deluge of 'embellishments' and half cocked historical revisionist versions of honest and actual facts (such is the nature of the non league bullsh*t grapevine), so I'd imagine that they would prefer to read a honest and unbiased overview of events today, involving their respective teams, instead of some superlative heavy, creative writing, bestowing unwarranted praise upon what was possibly the ugliest version of the 'beautiful game' I have had the misfortune to witness all season... so without further ado:
Though both teams would probably have settled for a point apiece before kick off and a 0-0 result doesn't do either club any harm, but as a spectacle, this game was bloody awful, in fact I would be overly generous to say that it was completely dire.
The only positives I can salvage from this wreckage of an afternoon, are that the food was cheap, the tea was hot and strong... and the weather stayed fine.
Both teams will be more entertaining than this next time out, because they couldn't be any more dull... even if they tried really hard.
Apologies if that offends anybody, but you can't polish a turd.
And even if you could, it would still be a turd. 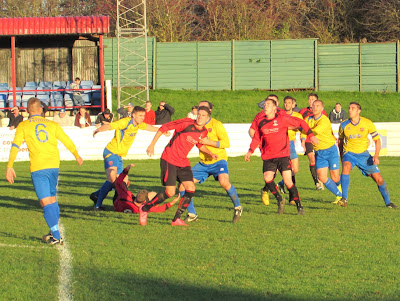 The Bulls, were without their captain and top scorer Dean Rick this afternoon...and although they are obviously not a one man team, it showed.
With Craig Mitchell missing having his prolific sidekick to feed off in the home side's penalty box, and Jimmy Ghaichem looking a little bit lost on the ball, without his chief marksman making the kind of runs that AFC Mansfield's playmaker works so well as a supply line for, the visitors lacked any kind of spark up front to ignite their forward play to life... and they looked flat as a consequence.
That Rudy Funk's side left Langwith Road with a point to show for their efforts today, is a testament to how hard their defence battled right to the final whistle, against a Shirebrook side who camped out in their high flying visitors final third for much of the second half.
Anthony Rowley looked to be the player most likely to burst the Bulls bubble, with some probing runs through the right channel, while Jake Currie and Matty Ord impressed me too... but one thing this AFC Mansfield side don't shirk from, is any kind of physical slog and although the home side shaded the game possession wise and the majority of the game took place around the visitors penalty area, no amount of huffing and puffing was going to blow the Bulls house down, not even after they went down to ten men, following the dismissal of Adon Spencer, for a second bookable offence.
With Luke Jeffs coming in from Frickley Athletic to slot in alongside the former Stags centre half Chris Timons, the middle of the visitors defence is never going to be a place for the faint hearted to stray into, without a whole load of back up. 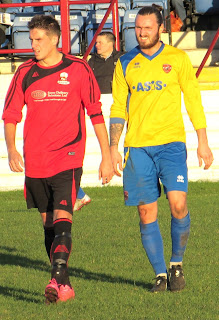 Following today's goalless draw, Shirebrook sit comfortably in ninth place in the NCEL first division table, while the Bulls are currently in third, 3 points behind Bottesford Town and two behind Hemsworth Miners Welfare, but with a game in hand on both of them.
Shirebrook now have a blank midweek before returning to league action at home to Glasshoughton Welfare on Saturday. While AFC Mansfield have two home games coming up this week, against Sherwood Colliery in the Notts Senior Cup on Wednesday and Worsbrough Bridge Athletic in the NCEL Division 1 on Saturday.
FT: Shirebrook Town 0 v AFC Mansfield 0
Posted by Davy Lamp at 17:35