There were mixed fortunes for tonight's teams as they went out on the road in the FA Vase on Saturday. The Tigers travelled to Dunston UTS, off the back of a 4-0 drubbing at Hall Road Rangers and claimed a morale boosting 1-0 win, courtesy of an Alec Denton strike, which earned them a third round tie at Pontfract Collieries next month, whilst the Bulls went down to a brace of second half goals at Hinckley.
Prior to the weekend however, Rudy Funk's side had won their previous three games in a row, including a eye catching 3-2 away win against fellow promotion chasers Pickering Town.

Tonight's short trip across North Nottinghamshire, marked the Bulls ninth away game in a row
Going in to this game the visitors were sat in fifth place in the table, while Worksop started the night in eighth, seven points behind AFC Mansfield, who have a game in hand over their hosts, the point apiece gained tonight didn't alter the Tigers league position any, but the visitors edged up one place to overtaje this season's dark horses Maltby Main and moved to within five points of the league leaders Handsworth Parramore, with two games in hand.
It says much about the rapid yet sustainable progress that has been made by the Forest Town based club, that just five years after their formation, they are up there among the bit hitters in this step 5 league on merit and going toe to toe against a big fish in a small pond such as Worksop Town, away from home in midweek in front of 455, with players of the calibre of the NCEL's top goalscorer Ollie Fearon, sitting it out in the stand serving a suspension.
By the same token, it also demonstrates what a turbulent and unstable spell of their proud 156 year history the home side have gone through in recent times, to have found themselves punching well below the previous weight, that they were used to competing at. 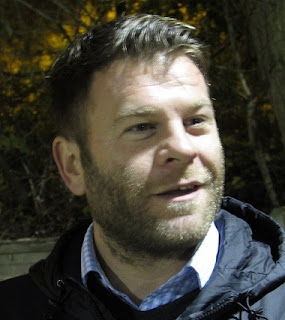 All told, the draw was probably a fair result tonight, with both teams keeping up a high tempo throughout, with no quarter being given, nor any challenge shirked.
The Bulls took the game to their hosts from the off, but as the interval approached, it was Worksop who finished the half in the ascendancy and who would've gone in at the halfway point a couple of goals to the good, had it not been for the agility of the visitors goalkeeper Jason White.
It was Connor Smythe who had the first goal scoring opportunity of the game, when the match referee Mr Drew Dutton spotted a holding offence just outside the home side's area, but the former Worksop (and Handsworth) player drove the resulting free kick straight at the Tigers four man wall.
Matt Wilson was looking solid against Jake Currie during the opening exchanges, but it was Currie who had the Tigers first chance, when Connor Higginson displayed some good close control before laying the ball off to him, but he lashed his shot wide of the post. 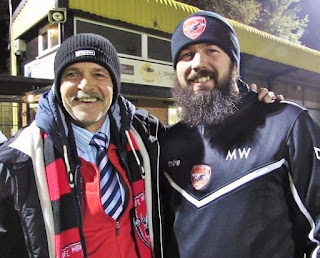 Cameron Dear motored towards the Worksop goal, straight down the middle, but Jordan Hodder moved across quickly from his right back berth to snub out the danger.
Jimmy Ghaichem had three attempts to launch the ball into the Worksop area towards Craig Mitchell, but Lee Hill, who has been a tower of the strength at the back since moving to Sandy Lane from Maltby, was getting his head to just about every single aerial ball and powering it away back in the general direction from where it had arrived, while Matt Varley fielded Ghaichem's third ball into the danger zone.
Calum Fielding did well to claim Ghaichem's right wing cross from virtually off of Nick Guest's head, as the visitors continued to show that they had set out their stall to get maximum points from tonight's game, rather than sit back behind the ball like so many other sides do at Sandy Lane..
Smythe, getting forward to good effect on the left, unleashed a low angled shot from just outside the area, that took a wicked deflection off Varley, but the young Tigers keeper Fielding got across well to his right and turned the ball round the post at full stretch. 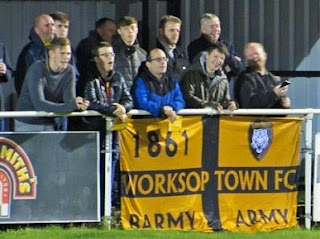 Phil Buxton's corner was cleared back towards him, and having considered his limited options, the Bulls number eight took matters into his own hands and cut in across the edge of the area, but put his shot over Fielding's bar.
Hodder should've scored when he ghosted into the Bulls area and had the chance to break the deadlock from close range, but White did well to block his shot down by his post and moments later the former Stags keeper was called into action again when he leaned backwards to turn Currie's header from six yards out, over his bar.
Jordan Turner threaded a pass through to Matt Thompson, but Liam Marsden put a blocking tackle in and put the ball out for a corner, from which Hill headed narrowly wide of the target from Thompson's delivery.
Mansfield had started the half well, and Worksop had finished it on the front foot, but at the break their was nothing to separate these two attack minded sides.
HT: Tigers 0 v Bulls 0
Worksop's new signing Matty Templeton came on at half time in place of Jack Barnett who was suffering with concussion and  two minutes after entering the fray he caught Mitchell with a late tackle and earned himself a verbal rebuke from the referee.
Steve Woolley the Tigers captain was trying to get his side going, but for the first fifteen minutes or so of the second half, the game turned into a quite physical battle of attrition in the middle of the park. Turner made a solo run into the visitors area, but didn't get enough power behind his shot to trouble White unduly. Fielding did well (again) to deal with Mitchell's effort as the visitors enjoyed another spell of possession. The Tigers Under 19 goalkeeper's performance tonight, won't have done his growing confidence any harm at all. But the young shot stopper didn't have a hope of getting anywhere near Mitchell's next shot on goal, when he saw the Tigers defence backing off, anticipating a lofted ball into the area and crashed the ball into the back of the net from thirty yards out.
Advantage Mansfield!
But that advantage only lasted for three minutes, when the crowd were treated to yet another sublime finish, when Woolley equalised with a fiercely struck free kick from twenty two yards out.
Inspired by the quality strikes for the two goals, Connor Higginson let fly from twenty five yards, which is roughly the same distance that the ball flew wide of the right hand upright, before crashing against the perimeter fence.
Higginson chased a long ball forward, but White made one of his trademark runs out of the area to head the ball clear, doubling up as goalkeeper cum sweeper.
Mansfield bombarded the Tigers area with a number of direct balls, but Lee Hill was enjoying his task of wrestling for and clearing every knock into his domain. The Hill/Varley partnership is going to keep many an opposition team at bay this season.
Ghaichem's shot was blocked by Varley and Fielding got behind Lynton Karkach's first time effort off the rebound. 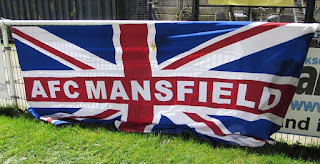 Karkach threatened again, charging forty yards down the left flank before whipping the ball over the bar from long distance. Ghaichem got free on the right, but as he hooked the ball over, looking for Mitchell, it ended up on the roof of the net.
Worksop piled bodies forward in an attempt to force the issue and Turner almost did just that when Hill released him with a good knock forward, but White and Jordan Annable cleared their lines between them.
A section of the home support lamented on the full time whistle, about how Jason White's agility had denied them the win with his saves at the end of the first half, but they had their own goalkeeper to thank for keeping them in the game right at the end, when Fielding turned Buxton's well struck free kick away.
FT: Worksop Town 1 v AFC Mansfield 1
All told, a great advert for NCEL football in a game which either team could've won on the night, had both goalkeepers not been on top of their game.
Posted by Davy Lamp at 22:27